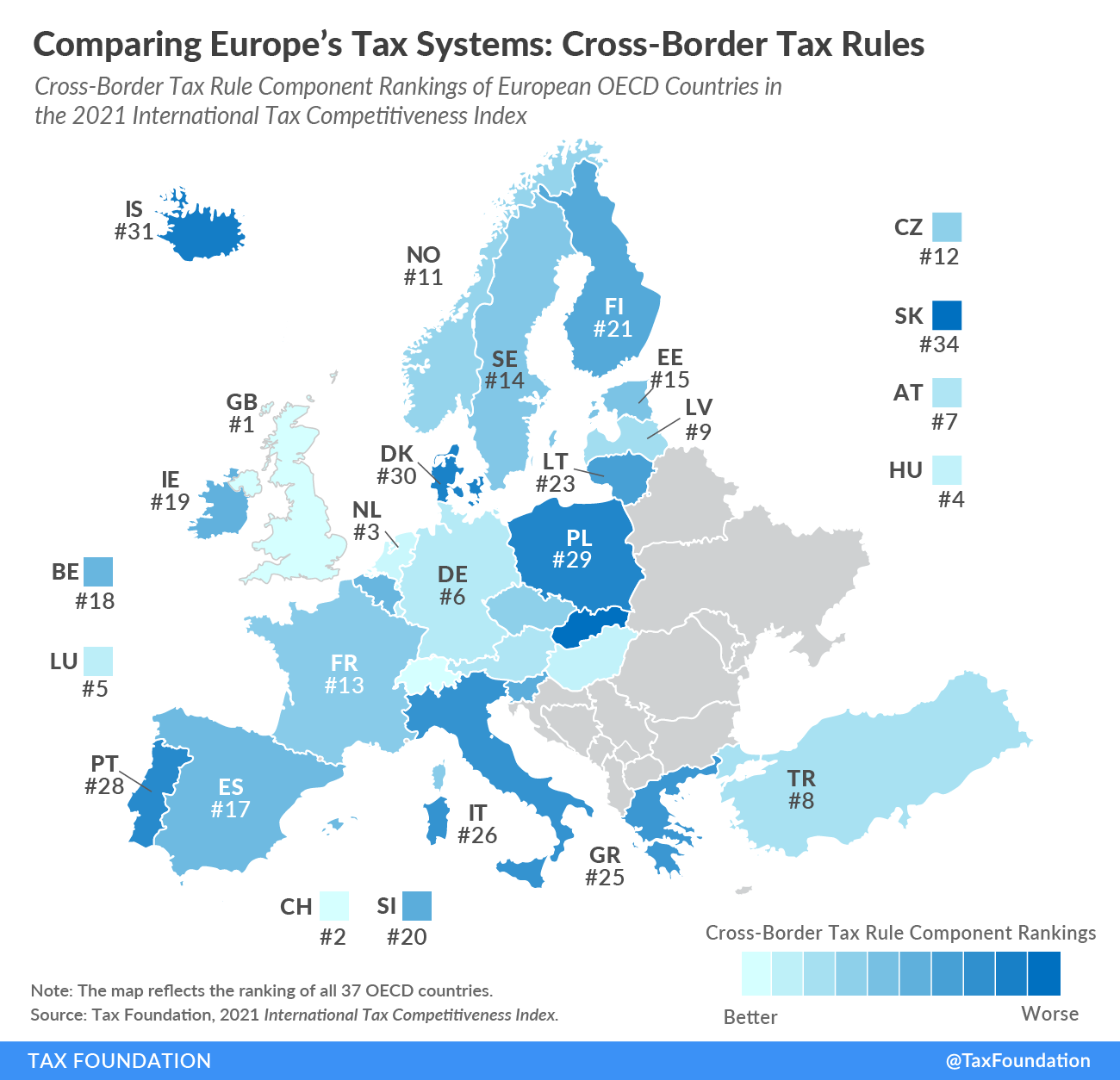 Today’s map looks at how European OECD countries rank on cross-border tax rules and is the last in our series examining each of the five components of our International Tax Competitiveness Index (ITCI). Cross-border tax rules define how income earned abroad and by foreign entities are taxed domestically, making them an important element of each country’s tax code.

Territoriality defines the extent to which foreign-earned dividends and capital gains are included in the domestic tax base. Tax treaties align many tax laws between two countries and attempt to reduce double taxation, partly by reducing or eliminating withholding taxes on dividends, interest, and royalties earned by foreign individuals and businesses. CFC and thin-capitalization rules seek to prevent multinational businesses from minimizing their tax liability through base erosion and profit shifting.

The United Kingdom’s cross-border tax system ranks highest in the OECD. Like most OECD countries, the UK operates a territorial tax system, fully exempting foreign-earned dividends and capital gains from domestic taxation. The UK has the broadest tax treaty network in the OECD, at around 130 countries. As a result, depending on the tax treaty, foreign entities from these countries are either not subject to the 20 percent withholding tax on interest and royalties earned in the UK or pay a reduced rate. There is no withholding tax on dividends. The UK has relatively strict CFC rules and thin-capitalization rules.

Among European OECD countries, Slovakia has the least competitive cross-border tax system (Chile ranks the lowest in the OECD). While Slovakia excludes foreign-earned dividends and capital gains from its domestic tax base, it levies a relatively high withholding tax of 35 percent on dividends (interest and royalties are subject to a 19 percent withholding tax). Slovakia’s tax treaty network consists of approximately 70 countries, and its CFC and thin-capitalization rules are relatively strict.

Click here to see an interactive version of OECD countries’ cross-border tax rules rankings, then click on your country for more information about what the strengths and weaknesses of its tax system are and how it compares to the top and bottom five countries in the OECD.

To see whether your country’s cross-border tax rules rank has improved in recent years, check out the table below. To learn more about how we determined these rankings, read our full methodology here.

5 Earnings Charts at 52-Week Highs
2023 VAT Rates in Europe
Buy this Soaring Tech Stock Up 100% in the Last Year for More Upside?
Top Wall Street analysts like these stocks for maximum returns
Here are 5 things to know about filing a tax return this year