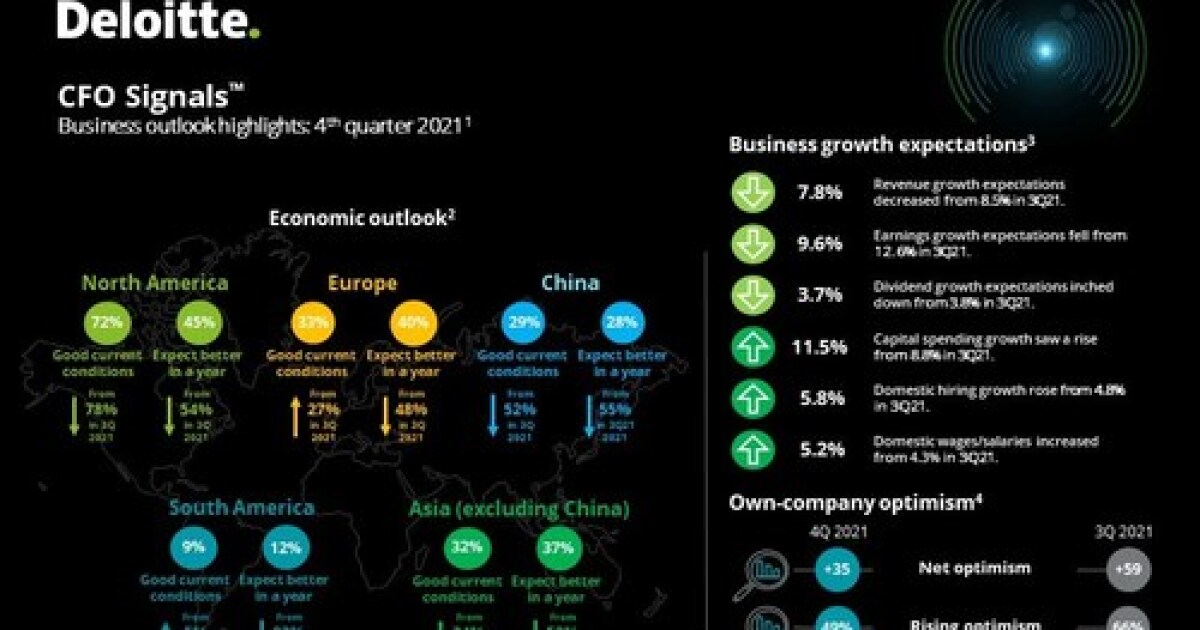 CFOs at major companies are expecting to pay far more money for talent next year, according to a recent survey from Deloitte.

The firm’s fourth-quarter CFO Signal survey, released earlier this month, found that 97% of the 130 CFOs polled at Fortune 500 companies expect their investments in talent and labor to substantially increase in 2022. CFOs also raised their year-over-year expectations for capital spending, domestic wages and salaries, and domestic hiring from the third quarter.

Nearly three-quarters (72%) of the CFOs polled by Deloitte rated the current North American economy as good, down slightly from 78% in 3Q21. Just under half of CFOs (45%) perceive North America’s economy as better in a year, compared to 54% in the third quarter of this year.

“CFOs are slightly less optimistic this quarter, both about their own company’s performance and for the economy,” said Steve Gallucci, Deloitte’s North America leader of the CFO Program, in a statement. “Talent concerns, including rising labor costs, will likely be a defining issue of 2022. Heading into the new year, the organizations that crack the code on attracting and retaining talent in this turbulent labor market should be primed for success.”

Three-quarters of the CFOs surveyed anticipate the target interest rate for U.S. federal funds to increase in 2022 and to range between 0.26% and 0.5% or 0.51% and 1.0%. Nearly half (46%) of finance executives believe the rate increase will occur in the second quarter, while 23% of CFOs each expect the increase to take place in either the first or third quarter.

“CFOs anticipate that the U.S. Federal Reserve will raise interest rates in 2022 but remain divided on just how high the increase will be,” said Ira Kalish, Deloitte Global’s chief global economist, in a statement. “Ultimately, monetary and tax policy, and where inflation ends up, will play a key role in CFOs’ strategic calculus in 2022.”

Nearly all (96%) of the respondents said that the global tax agreement spearheaded by the Organization for Economic Co-operation and Development, which set a minimum corporate tax rate of 15%, would have no impact on their current offshoring arrangements, nor would they make changes as a result of this agreement.