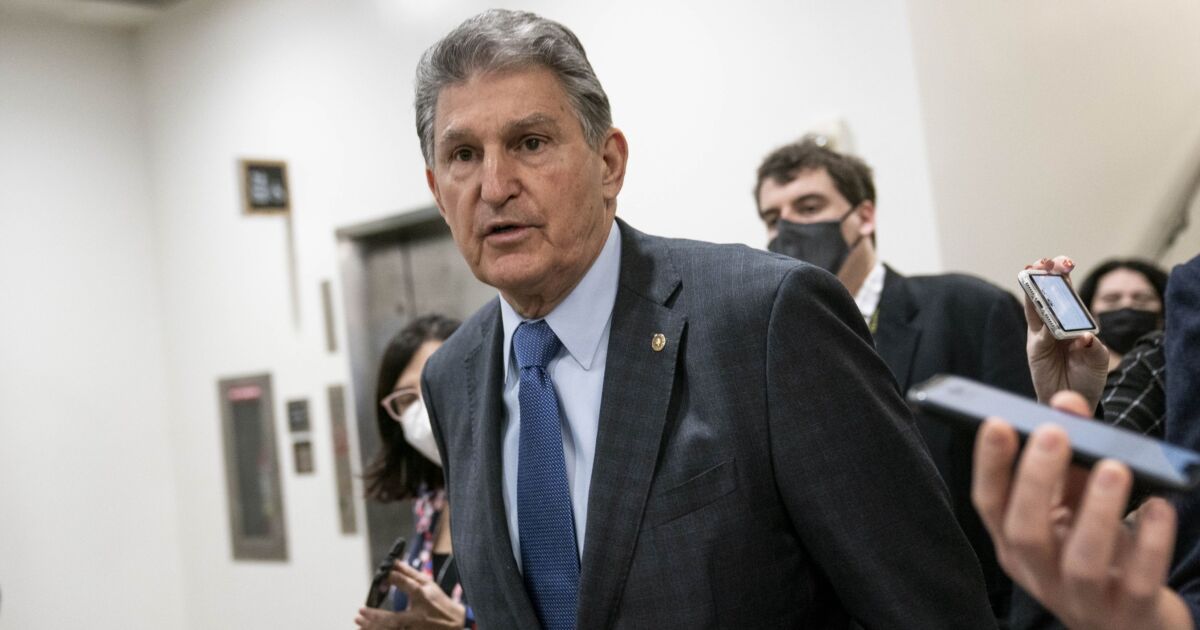 Senate Democrats are preparing for the possibility that passage of President Joe Biden’s roughly $2 trillion economic agenda will get delayed until the new year, as negotiations falter between the White House and West Virginia Senator Joe Manchin, according to people familiar with the negotiations.

Manchin has repeatedly raised concerns about the cost and impact on the economy of the legislation to carry out Biden’s plans for social spending and climate mitigation. The discussions between Biden and Manchin have been going poorly, according to two people, who spoke on condition of anonymity because the talks are private.

The House and Senate voted to raise the nation’s debt ceiling by $2.5 trillion, an amount intended to extend the government’s borrowing authority past next year’s congressional elections and into early 2023.Manchin has proposed eliminating a key component of the bill — a one-year extension of a Child Tax Credit that provides monthly payments to millions of parents, according to the people. The temporary payments expire Wednesday, and many other Democrats view the extension as vital to success of the legislation and their political fortunes.

When asked on Wednesday if he wants the Child Tax Credit taken out of the legislation, Manchin told reporters, “I’ve always been for Child Tax Credits” and that there were “bad rumors” circulating about his position on it. But when asked if he would want to continue it the way it is being proposed, with $300 a month for kids under the age of six for one year, he said, “I’m not negotiating with any of you.”

Manchin also has said he is concerned the bill could add to inflation, which reached a 6.8% year-over-year increase in November. Economists at the University of Pennsylvania have estimated that the bill would add 0.25% to inflation in 2022, mostly due to increased demand spurred by the monthly child tax credit payments.

Biden has argued the bill would have a “negative impact on inflation” lowering costs for child care and healthcare. He’s pinned rising costs to supply-chain shortfalls.

In addition, multiple components of the legislation, known as Build Back Better, are still being vetted by the Senate parliamentarian for compliance with the chamber’s budget rules. Delaying the bill to next year without a hard deadline could sap momentum for the legislation, which Democrats have been working on since April.

Senate Majority Leader Chuck Schumer said Wednesday that Democrats are “working on getting the Senate into a position where we can vote on the president’s Build Back Better legislation.” However he didn’t mention the Christmas deadline for passage that he’s regularly cited in the past.

Democrats may instead focus on attempting to pass new voting rights legislation and potentially changing Senate rules to accomplish that, according to two other people. One person said there is a chance Senate rules are changed to force lawmakers filibustering a bill to hold the floor and actually talk.

“We are just trying to get the Senate back to where it used to be where we can get stuff done and one guy can’t hold everything up,” Montana Democrat Jon Tester said.

There was growing sentiment among Democrats to focus on the voting legislation, which was given new urgency following redistricting decisions made by state legislatures. Senate Budget Chair Bernie Sanders said that needs to be addressed “immediately.”

“I would like to see Build Back Better dealt with as quickly as possible, but if we can’t deal with it right now it’s far more important we deal with the voting rights issue,” Sanders said.

In another sign the economic package may get delayed, Senate Finance Chairman Ron Wyden said senators have been asking him for “a fix” to ensure checks going out to millions of families continue to do so in January if the Senate doesn’t act.

“I’m going to talk to my colleagues and obviously there are a host of issues you have to resolve,” Wyden said. “You have to get all 50 senators on. But I’ve said for months now that I think the Child Tax Credit is a lifeline for families.”

It is not clear a stand-alone CTC extension would have the 60 votes to pass the Senate.

Senator John Thune, the No. 2 Republican in the chamber, told reporters that Republicans could accept a standalone deal on the tax credit that continued the monthly advance payments, but using the $2,000 tax credit amount that Republicans passed into law in 2017, rather than the credit worth up to $3,600 per child that Democrats want to continue.

Several lawmakers, including House Speaker Nancy Pelosi, said the credit could be made retroactive in the larger bill if it gets delayed past the Christmas holiday break.

Tester, who has been optimistic about the chance of passing Biden’s agenda this year, attributed the delay to the so-called “Byrd bath” scrub that the parliamentarian is doing to ensure the bill comports with Senate rules.

“I think the Byrd bath stuff is making it hard to get it done by Christmas,” Tester said. “I think it’s just going to take too much time.”

— With assistance from Ari Natter, Colin Wilhelm and Billy House.

Social Security, Medicare should be ‘off the table’ in debt ceiling talks, McCarthy says
The Federal Reserve is likely to hike interest rates again. What that means for you
U.S. unemployment system still plagued by delays 3 years after pandemic-era downturn
On the move: PKF Texas names next chief growth officer
M&A roundup: Mergers from shore to shore