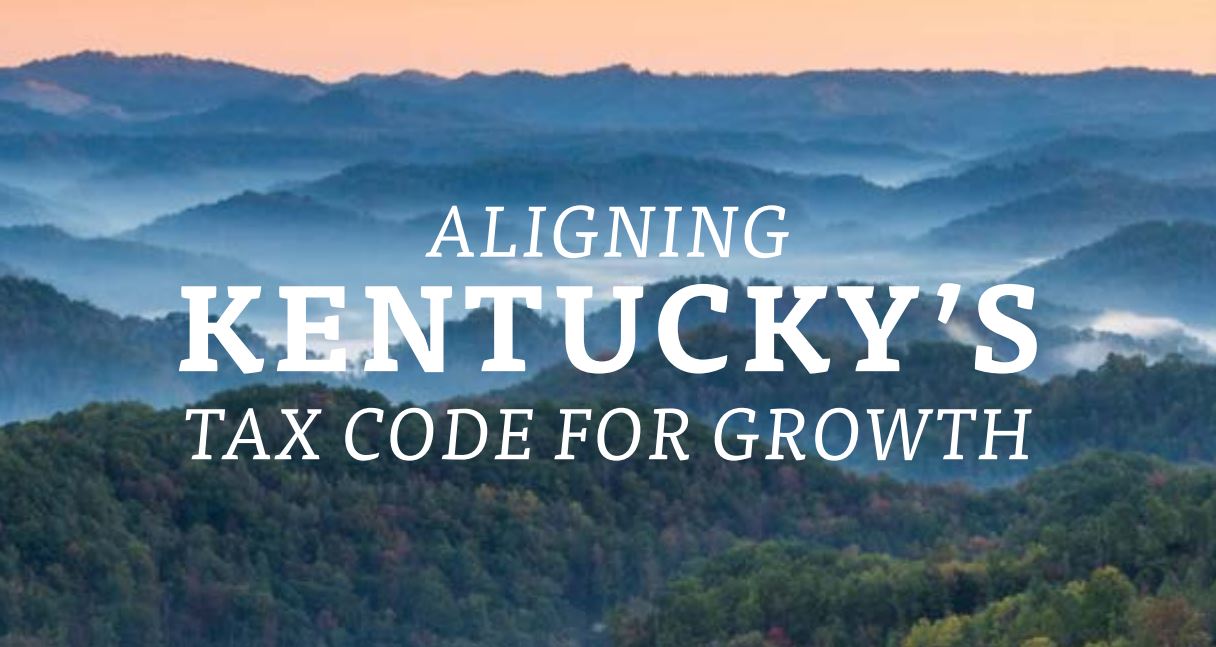 Tax reform has been on Kentucky lawmakers’ minds for years, and while significant progress has been made recently, substantial work remains to be done. In 2018, the General Assembly made important strides in creating a more neutral, pro-growth tax structure even while generating a net increase in revenue. With its reduction in income tax rates, consolidation of brackets, and modest sales tax base broadening, Kentucky put itself on the map as a state that is serious about reorienting its tax structure to enhance productivity and promote economic growth.

Much has changed in the world since 2018, with taxpayers and governments everywhere confronting new challenges on top of the old ones. There’s more motivation than ever to remove barriers that for too long have stood in the way of individuals’ and communities’ ability to thrive.

Many similarly situated states are seizing opportunities to make their states more attractive to individuals and businesses alike, and pro-growth tax reforms have been central to those efforts, with 11 states enacting laws to reduce their income tax rates in 2021 alone and more expected to come in 2022.

Kentucky is projected to experience robust revenue growth over the next few years, presenting a valuable opportunity for policymakers to pursue reforms. Ultimately, the goal of tax reform should be to enable the state and local governments to raise sufficient revenue to fund government services in a manner that avoids hindering business productivity, job growth, and personal wage growth.

In the pages that follow, we identify numerous structural deficiencies in Kentucky’s tax code and outline a series of reform solutions. Several of these reform solutions could be implemented on their own because their revenue impacts would be minimal, while others would be possible through revenue triggers that tie future reforms to future growth, and still others could be accomplished through tax swaps that reduce reliance on economically harmful taxes by increasing reliance on less harmful alternatives. (Pay-fors, where appropriate, are discussed throughout the publication.) All of these reforms—whether taken a few at a time or more comprehensively—would make the state’s tax code more structurally sound and more conductive to fostering long-term economic growth.

Kentucky has relatively well-structured and competitive corporate and individual income taxes at the state level but is held back by substantial taxes on business and personal productivity at the local level, as well as a complex state gross receipts tax on limited liability businesses. Kentucky also has room for improvement in its treatment of business investments and in its heavy reliance on incentives that add complexity to the tax code. The following recommendations would create a more competitive environment for businesses that would encourage long-term investment in Kentucky.

In 2018, the General Assembly significantly improved the individual income tax by consolidating six brackets into one and reducing the rate, using modest sales tax base broadening as an offset. While these reforms significantly improved the Commonwealth’s competitiveness and mitigated its overreliance on income taxes, there remains work to be done. Over the past two decades, Kentucky has lagged its competitors in terms of growth in gross state product, personal income, and inbound migration. States with no or low income taxes perform well on these metrics, and other states are increasingly taking notice and reducing taxes on productivity as a way to improve their competitive standing in an increasingly mobile economy.

Sales and Use Taxes

Kentucky has one of the lower sales tax rates in the country and is among a minority of states prohibiting local governments from using a sales tax as part of their revenue toolkit. Kentucky’s under-reliance on sales taxes leaves state and local governments turning to more economically harmful alternatives. In addition, despite valuable reforms undertaken in 2018, the sales tax base still falls short of capturing modern personal consumption patterns. If policymakers are to pursue comprehensive tax reform that rebalances Kentucky’s revenue source toward growth, sales tax modernization is a critical piece of that puzzle.

Kentucky is one of a few states that uses property taxes as both a local and state revenue source, but the Commonwealth’s real property tax collections are quite modest, due in large part to rate and levy limits that have been in place for decades. However, taxes on business inventory, machinery, and equipment, as well as inheritance taxes on individuals, introduce complexity and economic distortions into the property tax code. Kentucky has an opportunity to rebalance its revenue sources away from economically distortive taxes on tangible property and toward far less economically harmful taxes on real property.

While it is understandable that Kentucky’s largest sources of state and local tax revenue—income, sales, and property taxes, respectively—have been the primary focus of public discourse, other taxes have important fiscal and economic implications and deserve policymakers’ attention. Kentucky’s gas tax—a critical source of revenue for the Road Fund—has been raised infrequently, has failed to keep up with inflation, and has lost much of its purchasing power over time. Likewise, the unemployment insurance (UI) tax, which is paid by businesses and funds Kentucky’s unemployment compensation (UC) trust fund, has numerous structural deficiencies that ought to be reexamined.

There’s Still Room for Responsible State Income Tax Relief in 2023
Personalized Golf Balls
Roughly 70% of taxpayers are eligible for IRS Free File, but only 2% used it in 2022
Silvergate Capital shares jump after BlackRock reports increased stake in the crypto bank
EITC rules have changed, so be careful