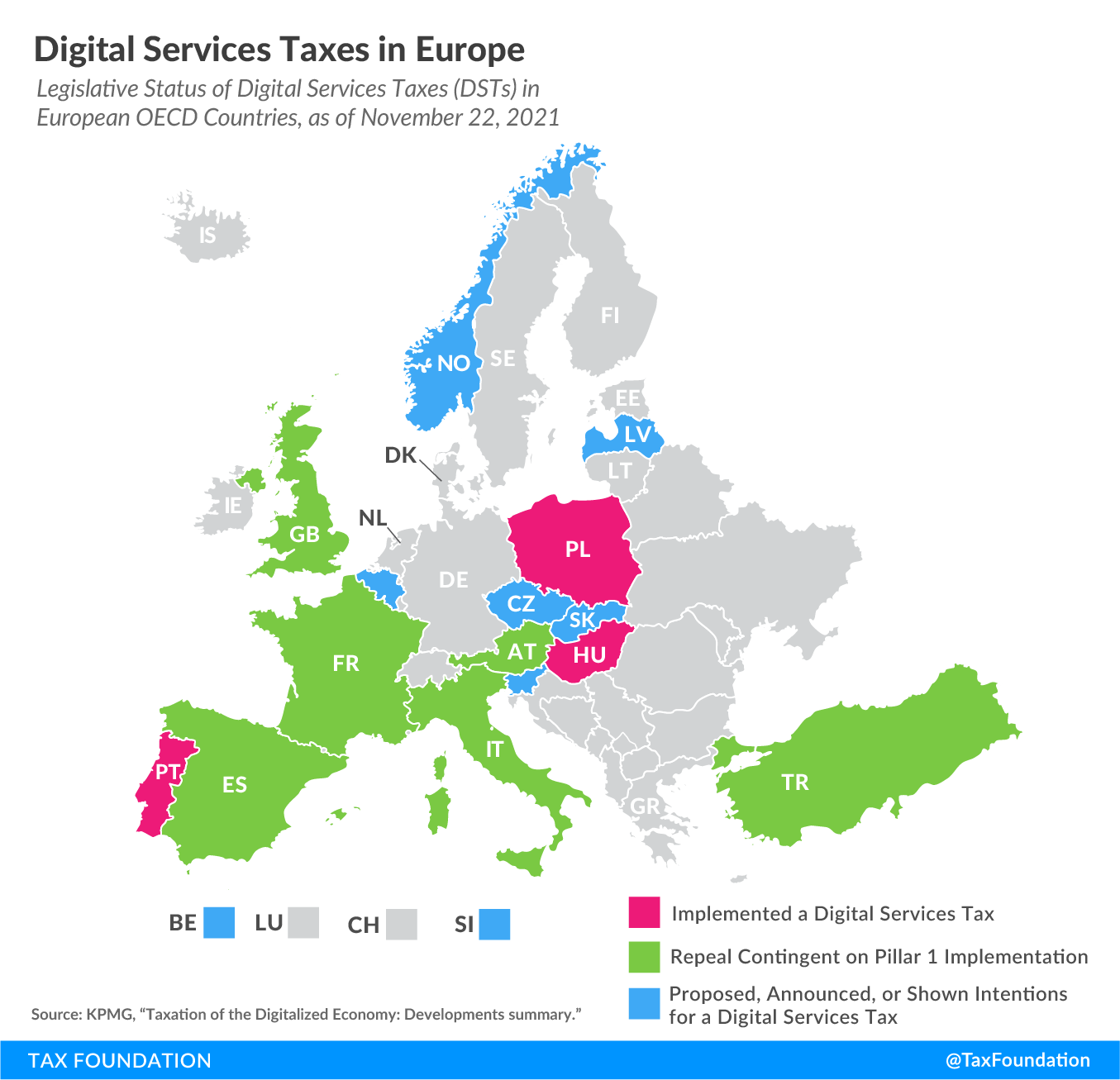 Over the last few years, concerns have been raised that the existing international tax system does not properly capture the digitalization of the economy. Under current international tax rules, multinationals generally pay corporate income tax where production occurs rather than where consumers or, specifically for the digital sector, users are located. However, some argue that through the digital economy, businesses (implicitly) derive income from users abroad but, without a physical presence, are not subject to corporate income tax in that foreign country.

To address these concerns, the Organisation for Economic Co-operation and Development (OECD) has been hosting negotiations with more than 130 countries to adapt the international tax system. The current proposal would require some of the world’s largest multinational businesses to pay some of their income taxes where their consumers are located. This proposal is referred to as Pillar 1.

Pillar 1 would replace some existing norms for taxing multinationals and run counter to some policies that countries have put in place to tax digital companies in recent years. The most common form is a digital services tax (DST) which is a tax on selected gross revenue streams of large digital companies.

Because Pillar 1 is focused on changing where profits are taxed, including for many large digital companies, DSTs are expected to be repealed in a transition process which is expected to be completed by the end of 2023.

On October 21, a joint statement from Austria, France, Italy, Spain, the United Kingdom, and the United States laid out a plan to roll back digital services taxes (DSTs) and retaliatory tariff threats once the Pillar 1 rules are implemented. On November 22, the U.S. Treasury announced that Turkey had agreed to the same terms.

However, those are not the only countries that may be impacted by the OECD agreement. About half of all European OECD countries have either announced, proposed, or implemented a DST. Because these taxes mainly impact U.S. companies and are thus perceived as discriminatory, the United States had responded to the policies with retaliatory tariff threats.

Austria, France, Hungary, Italy, Poland, Portugal, Spain, Turkey, and the United Kingdom have implemented a DST. Belgium, the Czech Republic, and Slovakia have published proposals to enact a DST, and Latvia, Norway, and Slovenia have either officially announced or shown intentions to implement such a tax.

The proposed and implemented DSTs differ significantly in their structure. For example, while Austria and Hungary only tax revenues from online advertising, France’s tax base is much broader, including revenues from the provision of a digital interface, targeted advertising, and the transmission of data collected about users for advertising purposes. The tax rates range from 1.5 percent in Poland to 7.5 percent in both Hungary and Turkey (although Hungary’s tax rate is temporarily reduced to 0 percent).

These DSTs have been generally considered to be interim measures until an agreement was reached at the OECD level, and now that such an agreement has been reached it will be important to monitor how countries change or repeal their DSTs. In addition, the European Union (EU) intends to implement its own digital levy from 2023 onwards. At the same time, the United Nations (UN) has added special provisions for income from automated digital services to the UN Model Tax Convention (see Article 12B), which would apply to treaty parties that agree to its inclusion.

Note: This blog, originally posted on January 29, 2020, has been updated on November 22, 2021 to reflect the October 21, 2021 joint statement from Austria, France, Italy, Spain, the United Kingdom, and the United States regarding a plan to roll back digital services taxes (DSTs) and retaliatory tariff threats once the Pillar 1 rules are implemented. It also reflects the November 22, 2021 U.S. Treasury announcement that Turkey has agreed to the same terms.