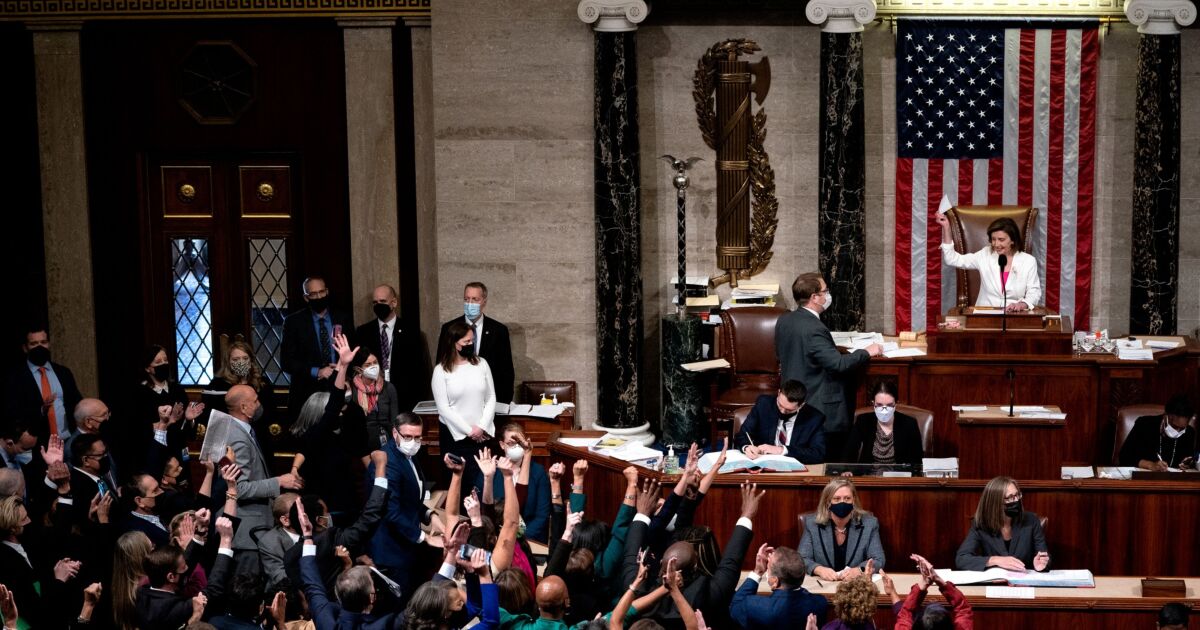 The 220-213 vote followed months of intra-party squabbling. It came only after the nonpartisan Congressional Budget Office delivered a cost estimate for the bill, which moderates had demanded before casting their votes. The CBO finding that it would increase the deficit by $367 billion over a decade proved acceptable to enough holdouts for the bill to pass. Maine Representative Jared Golden was the only Democrat to vote no, along with all Republicans.

The House action is a political victory for Biden, but his agenda is still far from the finish line. Democratic senators are expected to make extensive changes before voting on it, potentially in December. Passage in that chamber will require unanimous support from the Democratic caucus, and two pivotal members, Joe Manchin of West Virginia and Kyrsten Sinema of Arizona, have yet to give their full public support. Republicans are united in opposition.

“Ninety percent of this bill was written together,” Pelosi said of the Senate during a news conference after the vote. “Whatever comes out of the Senate, we’ll be working together with them.”

Biden called Pelosi to congratulate her and in a statement urged the Senate to act quickly.

“For the second time in just two weeks, the House of Representatives has moved on critical and consequential pieces of my legislative agenda,” Biden said in the statement, referring to the recently enacted $550 billion infrastructure bill. “Now, the Build Back Better Act goes to the United States Senate, where I look forward to it passing as soon as possible so I can sign it into law.”

Pelosi’s plan to pass the legislation on Thursday was delayed by House GOP leader Kevin McCarthy, who spoke for more than eight hours on the House floor to criticize the bill as the “single most reckless and irresponsible spending bill in our nation’s history.”

The Build Back Better proposal, as Biden’s plan is known, would spend $1.64 trillion over ten years, according to the CBO’s analysis. When tax credits are factored in, the investment in the economy is more than $2 trillion, however. The spending increases and tax cuts add up to $2.4 trillion according to an analysis by the watchdog group Committee for a Responsible Federal Budget.

It would provide universal pre-K, childcare subsidies, four weeks of subsidized paid family leave, subsidized Obamacare premiums and an alternative to Medicaid in some states, and would allow Medicare to negotiate prescription drug prices for the first time while capping out-of-pocket costs for seniors. Medicare would cover hearing benefits for the first time.

The legislation aims to fight climate change by imposing a fee on methane and providing a slew of tax credits for renewable energy and electric vehicle purchases, and it would provide relief from deportation for millions of undocumented immigrants.

On the tax side, the bill would extend expanded child tax credits and make them permanently refundable to those without sufficient income-tax liability to get the full benefit. It would also increase the cap on federal deductions for state and local taxes, a provision that will benefit wealthy taxpayers and which has sparked some push-back from progressives.

To raise revenue, it would impose a new 15% corporate minimum tax and a 5% surtax on individual incomes over $10 million, with an additional 3% tax above income of $25 million. There are also taxes on large individual retirement accounts, stock buybacks and nicotine.

Republicans point to data showing the biggest jump in year-over-year inflation in 30 years in arguing against the bill. They contend the Democrats’ plan would stoke inflation by pumping more money into the economy at a time of supply-chain bottlenecks and worker shortages. GOP lawmakers also say it provides disincentives to work, by de-linking the child tax credit from employment requirements.

“At a time when Americans are paying outrageously higher prices for gas at the pump and food at the grocery store, Democrats responded by ramming through a multi-trillion dollar tax-and-spending spree that will drive inflation even higher, hitting lower-income families the hardest,” the House GOP said in a statement after the vote.

The White House estimates that the bill cuts the deficit by $112.5 billion over ten years when its estimate of higher tax revenue from increased tax enforcement is included.

Overall, it’s a smaller package than Biden and some Democrats initially envisioned. Progressives initially wanted a $6 trillion bill and compromised on a $3.5 trillion top-line this summer, before agreeing to further cuts to their ambitions. Proposals such as free community college and Medicare vision and dental benefits were dropped due to opposition from Manchin and Sinema, while other proposals such as the child tax credit expansion were shortened to just a year.

A compromise was struck this month to add in elements of House Democrats’ drug-price legislation. That proposal allows limited negotiation for a set number of drugs, provides rebates to seniors if prices rise faster than inflation and caps out-of-pocket costs. The provisions don’t feature a tax penalty on drug companies that fail to lower prices for private insurance, however.

More cuts to the bill may be coming very soon. The Senate’s top rules official over next week’s Thanksgiving recess will review the package and determine whether any provisions, such as a new policy addressing immigration, break the chamber’s rules for the special budget process that Democrats are using to ram the bill through without any Republican support. That would force Democrats to drop the proposals in order to continue to use the filibuster-proof budget tool to pass the legislation.

Manchin and Sinema will largely determine whether the Senate can pass the Biden bill before the end of 2022 and how much further it is trimmed back. Manchin has objected to the four weeks of guaranteed paid family leave in the House bill, as well as an immigration proposal granting deportation relief for some undocumented immigrants and a new Medicare hearing-aid benefit.

The Senate is also not fully on board with a provision lifting the $10,000 cap on federal deductions of state and local taxes to $80,000. Senators Bernie Sanders of Vermont and Bob Menendez of New Jersey have proposed an alternative, of means-testing the cap to up to $500,000 in income. Colorado Senator Michael Bennet is also fighting against attempts to lift the SALT cap.

The job of resolving those conflicts and navigating Senate floor amendments on the bill will fall to Majority Leader Chuck Schumer, who said this week he wants to have it all wrapped up before Congress breaks for the Dec. 25 Christmas holiday. That would then allow the House to vote on the Senate-amended version.

Some elements of the House-passed bill appear to have the 50 votes needed to pass the Senate, including most of the tax increases on the wealthy and businesses. Biden last month concluded months of back-room talks with senators and said that these items can garner enough votes to pass.

Consensus has largely been achieved on a provision to make the child tax credit permanently refundable for low-income parents without an income tax liability, and for one year boost the payments to as much as $3,600 per child. The same holds for subsidies for Obamacare insurance premiums and a provision to provide insurance to the poor living in the 12 states that have not expanded Medicaid eligibility.

The bill also addresses climate change, including tax incentives for renewable energy generation, the purchase of electric vehicles, biofuels, and energy storage, that are likely to pass. Vulnerable to being cut are a first-time fee on the emission of methane — a potent greenhouse gas — from the oil and gas sector and limits on oil drilling in most U.S. waters and Alaska’s Arctic National Wildlife Refuge, due to Manchin opposition.

New York Democratic Representative Alexandria Ocasio-Cortez said she hoped the Senate makes changes that progressives favor, including limiting eligibility for the SALT deduction and creating a path to citizenship for some undocumented immigrants.

“I do believe that 90% of this bill is locked in,” she said. “But you know, it’s not just conservative changes that can happen.”

Democrats hope that progress on the economic bill, paired with enactment earlier in the month of the largest infrastructure investment in decades, will boost Biden’s flagging popularity and the chances of the party bucking historical trends in order to keep its congressional majorities in the 2022 midterm elections. Biden’s job approval sank to 36% in a national survey conducted by the Quinnipiac University Poll and released Thursday.

— With assistance from Laura Davison and Laura Litvan