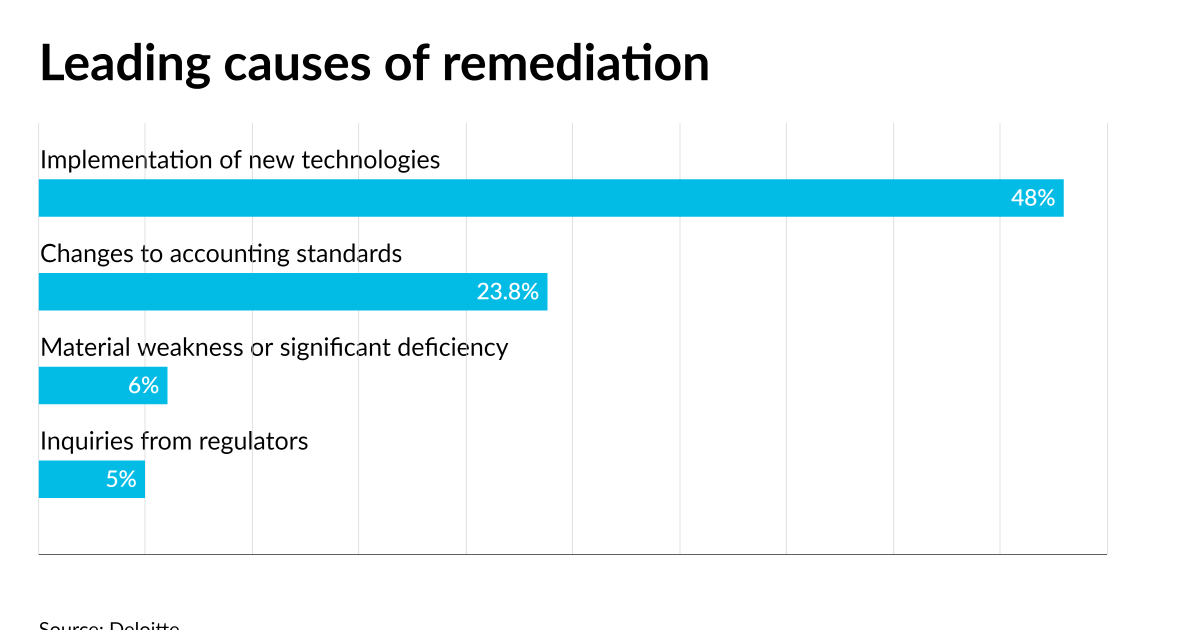 More companies have issued financial restatements in the second quarter of 2021 than any year since 2013, according to a recent report from Deloitte, driven in part by SEC guidance on special purpose acquisition companies, or SPACs.

The COVID-19 pandemic has also been a factor, prompting companies to at least quietly “remediate” their financials, if not issue restatements to the capital markets. Deloitte found that the leading cause of remediation was implementation of new technologies such as ERP systems (48%), followed by changes to accounting standards and the related adoption work to comply with them (23.8%), a material weakness or significant deficiency (6%) and inquiries from regulators (5%).

“We conducted a recent poll and questioned executives about what they’ve seen in the last year about remediation and restatement within their companies,” said Pam Duzik, an audit and assurance partner at Deloitte & Touche who co-authored the report and a related report. “We found a large percentage, more than half, had some type of remediation activity over the last year, and more than half expected some form of remediation in the current year, and that remediation can take a lot of different forms. Essentially what we’re hearing from the financial community in these changing times — especially with digital transformation and nonrecurring transactions — all these types of things that are happening in our world today are causing them to reevaluate how they did something and continually fix or enhance a process that they previously have put in place.”

Deloitte has been hearing similar concerns from its clients over the past year. “What sparked the question was some observations in the marketplace,” said Matt Hurley, a senior manager of risk and financial advisory at Deloitte & Touche. “For a lot of organizations we work with, we noticed that we were being asked for help, and we were curious as to what was driving this. We were seeing an uptick in focus in these areas. The poll results were pretty astounding, with more than 50% of those polled saying that they’ve taken efforts to remediate financial activities in the last year. That aligns with what we were getting questions about, so it seemed like a relevant topic.”

New technologies have been playing a role in restatements and remediation. “There are a lot of reasons why they’re updating their technology,” said Duzik. “If you think about all of the new standards, and moving into the COVID remote-first hybrid environment, there has been a need to rapidly improve their technology and digital presence overall. Then you’ve got cyber risk that you have to deal with on an ongoing basis.”

The pandemic has forced many organizations to adapt and improve their technology while dealing with staffing shortages. “We saw people moving so rapidly,” said Hurley. “They had to move quickly to a remote environment or deal with changes to accounting standards to get something serviceable. Organizations, now that they’ve had time to reflect on what they put in place, are realizing that it’s not necessarily sustainable or that they created other challenges that they need to address. They may not have fully thought through all of the control ramifications or about the undue burden involved in the process for people. Now that they’ve gotten through day one of either a new standard, an ERP implementation, a change in technology, or a move to remote work, they’ve had some time to think about what they really want their future state to look like. What did I mess up, and how do I fix it so I have a sustained process going forward that’s controlled and provides accurate financial reporting? As you think about the quest for talent and resources, the better the processes you have in place, the less demand on your people. We’re seeing a number of folks revisit processes that were not efficient and remediate them. In part they‘re trying to fight that talent battle to make sure they have the right people to perform the activities. Another way to address this would be to make their processes better and improve on them.”

Mergers and acquisitions are also adding to the challenges. “Anytime you bring a new business into your business, that system is likely going to need changing as well,” said Duzik. “It’s such a busy environment, with things coming from every direction causing these changes.”

A number of organizations have recently been reaching out to Deloitte to help them remediate their revenue recognition processes, even though FASB issued the revenue recognition standard in 2014. “It’s still coming up,” said Hurley. “When you have an acquisition, or your system changes, or you have a new go-to-market strategy, oftentimes organizations are finding that it’s either breaking something or putting stress on what they’ve built and they need to remediate what they’ve historically done and refine it.”

Organizations need to adapt to changes and be ready for possible remediation so they can avoid restatements if possible. “Our findings from the survey point out it’s not so much if you’re going to need to remediate something, but when,” said Hurley. “Being ready when that need arises, having a plan, understanding what you need to do, thinking about the controls, and revisiting your risks become very critical in that readiness to respond. How do you as an organization make sure that when the need arises, you’re prepared so you’re not caught off guard and you can deal with it, so you don’t have something that escalates to the level of restatement and you can stay ahead of these challenges?”

Guidance issued by the Securities and Exchange Commission in April about how to account for warrants in a SPAC transaction has also driven a number of financial restatements from companies (see story).

“Our focus is really on remediation more broadly,” said Duzik. “In some circumstances, a small portion will end up in a financial statement or in a restatement of your internal controls opinion and conclusion. We’re thinking more broadly about identifying these areas of risk and making sure that you’re staying on top of them so they don’t become that significant. Certainly there are pockets where we’re seeing more restatements. I’m thinking of the SPAC world and the warrants related to that. But our focus is more broadly on the areas to really hone in on and get remediated regardless of whether it creates a restatement for you or not.”