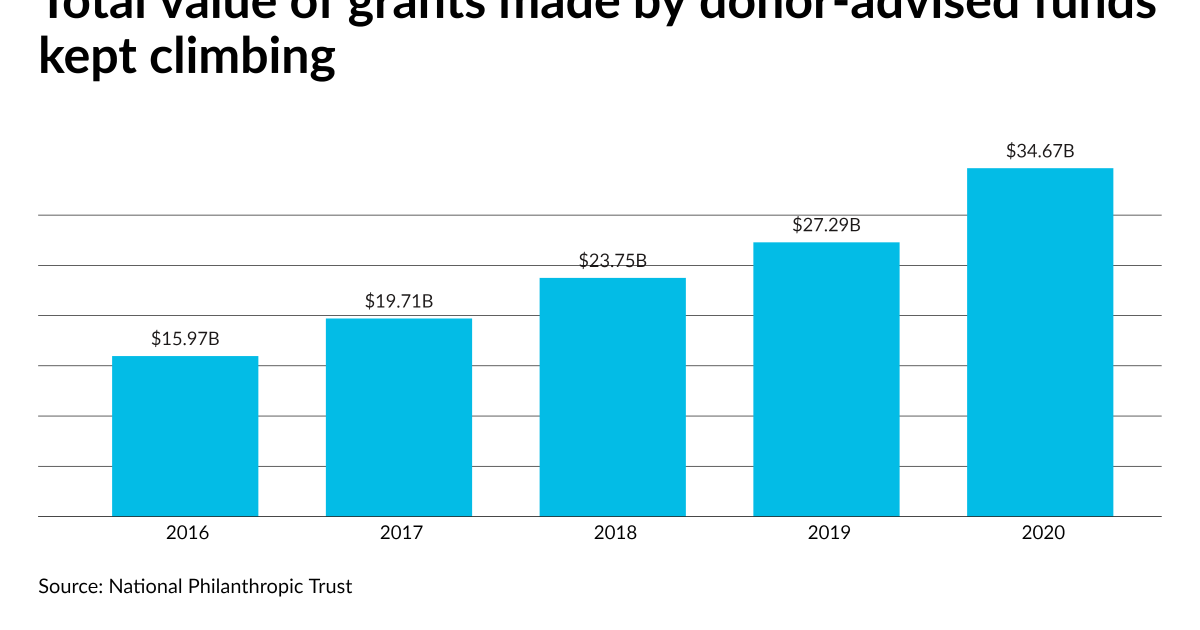 Donor-advised funds increased their donations to charities last year in response to the COVID-19 pandemic, hitting the biggest levels in over a decade.

Grants to charities around the world grew 27% in 2020 to $34.67 billion, according to an annual report released Tuesday by the National Philanthropic Trust. Contributions to DAFs increased 20.6% to $47.85 billion in 2020, while charitable assets grew 9.9% to $159.83 billion, and the number of DAF accounts surpassed one million for the first time.

The COVID-19 pandemic highlighted the stark gaps between the wealthy and poor as it led to massive layoffs last year and long lines outside food pantries. While the federal government responded with trillions of dollars in relief with the CARES Act and other legislation, charitable donors have also been upping their contributions and donations.

The pandemic led to giving to not only help with food and health care, but with other needs as well.“There were a lot of grants going to charities for the first time from donors they never granted to before for relief,” said National Philanthropic Trust CEO Eileen Heisman. “Sometimes they were for research or they were for frontline health care workers, like daycare expenses or food, as in the early grants in New York. But also people stayed pretty true to their favorite charities. They were pretty loyal to the entities that they had given to previously, and then they added new ones. There were grants to the arts. A lot of arts organizations couldn’t do performances any more so there were a lot of fundraisers and human service organizations were canceled, so we saw people supporting the charities that they really liked before and also new ones. I think that explains a lot of that 27% increase.”

The increase was the largest since the financial crisis of 2008-2009, and the data only covers through June 30, 2020, so next year’s report will probably show a large increase as well.

“With the second part of the pandemic and the social justice movement, we’re not going to see that grantmaking spike until next year,” said Heisman. However, because the percentage of growth was so much, it may not increase as dramatically in next year’s report. “But when we compare the numbers to what it was like a few years before, it’ll be a big increase we expect as well,” said Heisman.

Grants grew 30% faster than contributions in 2020, she noted, and grant growth has outpaced contribution growth for six out of the past 10 years, while total annual grantmaking from DAFs has increased four-fold over the past decade.

Accountants were among the financial advisors who were helping clients decide what to do with their donor-advised funds.

“I would expect that a lot of accountants were advising their clients on how much money they could be giving out of their paychecks in that fiscal year or their assets,” said Heisman. “The other thing that accountants may have been involved with is that we heard a lot of people when they were in lockdown were looking at their estate plans and trying to figure out what to do. So I think when individuals are doing estate plans or families, they talk to their lawyers and their accountants. I assume that in a lot of the estate planning that happened during lockdown, which was during this period, accountants were being consulted on that as well.”

Donor-advised funds are usually opened by wealthy individuals, but Congress also allowed taxpayers who don’t itemize to deduct charitable contributions of up to $300 for individuals and $600 for couples, while those who do itemize could deduct up to 100% of their adjusted gross income.

“It’s always a relief to see the federal government realize it’s time to give as much tax benefit as we can to people trying to help others in their community because it’s an acknowledgement of them saying we can’t do it all ourselves,” said Heisman. “By giving the additional tax relief for charitable gifts, it helps a lot to get money out to operating charities.”

The possible tax changes that Congress has been considering as part of the Build Back Better Act may prompt more use of DAFs. “Sometimes right before there’s a change like this, you get a big bunch of contributions,” said Heisman. “When there are regulations being suggested, even if they never pass, donors tend to like to make gifts when they know what the benefit is going to be, as opposed to trying to guess next year. We often will see a spike in gifts during the stable period as opposed to the mysterious period, which is will this bill pass and if so, what will it really say. It’s hard to know exactly the impact some of these changes are going to have. I think for the moderately wealthy or the average person, raising the standard deductions a couple a few years ago, that really disincentivized middle-income Americans to make gifts, but the ultra high net worth and the high net worth tend to be very generous during times in which they’ve accumulated a lot of wealth. I think they enjoy the tax deduction, but I also think they enjoy the giving back part of it as well.”

Sometimes grants from DAFs don’t necessarily go to charities. A report released in August by the Institute for Policy Studies found that at least $1 billion in commercial donor-advised fund grants went to other commercial DAF sponsors in 2019, rather than being distributed to charity.

“That does happen from time to time, and sometimes it’s about the fees,” said Heisman. “They get better fees or their advisor is moving. There are also giving circles where a bunch of donors that might have DAPs in different places will collectively try to decide how to look at a social problem like homelessness or women’s issues, and they’ll often then put their money in a single entity and then make a grant from there. We see giving circles using DAFs, and those are ways DAF-to-DAF transfers happen. So sometimes it’s fees, sometimes it’s investments or advisor moves, and sometimes it’s giving circles, but we don’t see it as a big trend at all. In fact, the trend we’re seeing is fairly aggressive grant making.”

Cryptocurrency gains may have prompted some investors to put their gains in DAFs. “It’s mostly younger donors,” said Heisman. “Our biggest number to date was $12 million. Crypto was really high and then dropped and, when it dropped, of course we saw far less. Now that it’s high again, it wouldn’t surprise me that we see a bump during giving season. But one of the other things that’s happened is we have these other entities that aren’t donor advised funds. They’re called designated funds, and the funds are designated specifically to a single charity. There have been some charities that have come to us and said we aren’t comfortable taking cryptocurrency, but if we start a designated fund at NPT and you take it and liquidate it for us and then the money comes to us as cash, post cryptocurrency, would that be OK with you? And so we do that, and we do that for other charities who aren’t comfortable. We accept most cryptocurrencies, but there are some that can be risky, or we have a hard time figuring out how to process. For the bigger ones, we have a process for taking it that we think is safe, but it’s not that we take all of it all the time.”

Op-ed: Salesforce appoints ValueAct’s Morfit to its board and a proxy fight may loom ahead
Supreme Court challenges to Biden student loan plan hinge on overreach, financial harm
Gautam Adani calls off $2.5 billion equity sale as regulatory concerns grow
Testimony: Considerations for Additional Income Tax Reform and Relief in Nebraska
Wait until age 70 to claim Social Security: ‘The return on being patient is huge,’ says economist