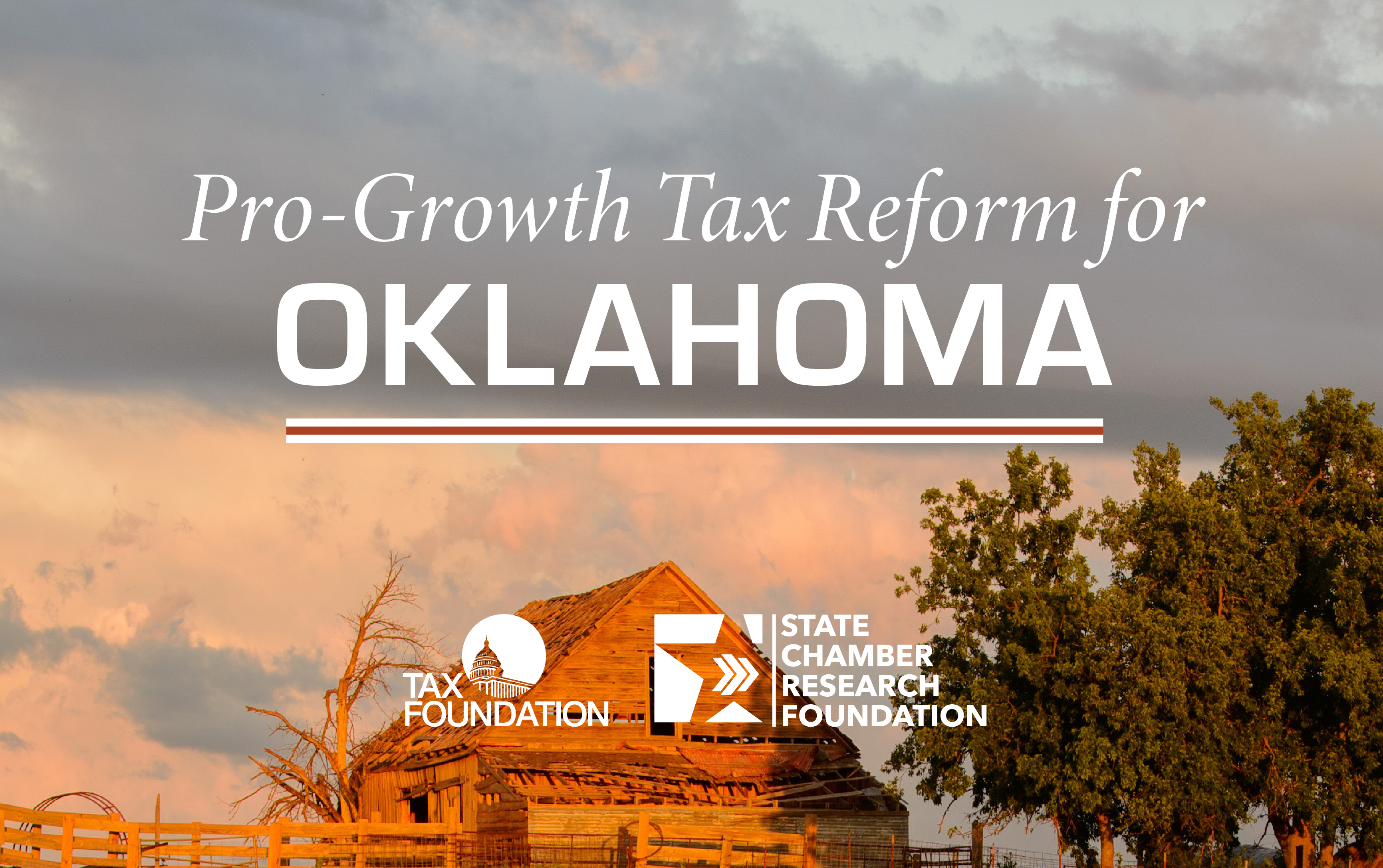 Oklahoma policymakers have been focused on tax reform for many years, always keeping an eye on the state’s neighbor to the south. Legislators succeeded in reducing rates for both individual and corporate income taxes, but Oklahoma is far from alone in this pursuit. In an increasingly mobile economy, states are rightly becoming more concerned about their tax competitiveness, and many have similarly moved to reduce rates—and to make structural reforms, besides.

Although the recent rate reductions are an important step forward, many elements of Oklahoma’s tax code remain an impediment to its competitive standing. Fortunately, Oklahoma finds itself in a good position: the state is in need of pro-growth tax reform at the very same time that it has a revenue buffer to help absorb transition costs from tax policy changes.

In the following pages, we identify a number of deficiencies in Oklahoma’s tax code and outline possible solutions for reform. Several of the proposals could be adopted on their own because they have minimal revenue impacts, but others are possible through revenue triggers or tax swaps that shift reliance onto less distortive taxes, or by forgoing a certain amount of revenue growth. Overall, our recommendations would create a more neutral tax code that would encourage long-term growth in the state.

Oklahoma’s corporate income tax currently features a flat, 6 percent rate that is set to drop to 4 percent in tax year 2022. While this is a competitive rate, several structural elements work against the low rate, penalizing businesses that sell both into and out of the state. The following recommendations would create a more competitive corporate tax environment that would encourage long-term investment in Oklahoma.

Lock in full expensing of capital investment. Commendably, Oklahoma conforms to the recent federal policy of allowing corporations to fully deduct the cost of their machinery and equipment purchases in the first year. But with the current federal treatment scheduled to expire, Oklahoma would be well-advised to lock in the current system, decoupling from future changes to federal law and instead providing permanent full expensing.

Oklahoma currently has a six-bracket individual income tax with a top rate of 5 percent, which is set to decline to 4.75 percent in 2022. This rate is competitive, although the state sees stiff competition from neighboring Texas, with its lack of an income tax. While full income tax repeal would be difficult, the state has a number of responsible options for income tax rate reform short of complete elimination.

Consider options for rate reductions that build on previous reforms. Oklahoma lawmakers could select from a menu of options for prioritizing continued income tax relief. In this publication, we explore the implications of several options, including:

Oklahoma’s state-level sales tax rate of 4.5 percent is relatively modest on its own, but local option sales taxes ramp up the average combined sales tax to 8.95 percent, the sixth highest rate in the country. As the state’s reliance on sales taxes is higher than average among states, it is especially important that the sales tax is as stable and neutral as possible. The following recommendations would move the state in this direction and provide revenue that could pay for additional tax reform in other areas.

Maintain local revenue neutrality under base broadening. Any sales tax base expansion the state uses to pay down reforms will yield sizable increases in tax collections on the local level. To avoid an extra tax burden for residents, the state should limit local sales tax collections in some way if the base is expanded, whether that takes the form of a levy limit, a rate cap, or a change in local aid formulas.

Change to market-based sourcing of services. Oklahoma currently imposes sales tax on tangible goods in the place they are purchased. It should extend this same treatment to services instead of adding complexity by taxing them where the income-producing activity occurs, an approach which puts in-state producers at a competitive disadvantage.

Adopt a de minimis exemption for taxes on tangible personal property. Many small businesses face negligible tax liabilities but are still forced to go through a costly filing and compliance process. Exempting a certain amount of business machinery and equipment from taxation and making this exemption a filing threshold would take these small businesses off the tax rolls with minimal revenue loss.

Repeal the inventory tax.  Oklahoma has already agreed to exempt short-term inventory for businesses in the state. It should build on this effort and consider a full repeal of its inventory tax, either with a local phaseout or state revenue transfers. This would make the state more attractive to retailers, distribution centers, and any other inventory-heavy businesses.

Eliminate the franchise tax. Franchise taxes are levied on a business’s net worth instead of its ability to pay. As such, franchise taxes cause economic distortion and hit businesses especially hard in times of economic downturn. Oklahoma limits this damage by imposing a low rate and capping payments at $20,000, but the franchise tax still functions as a nuisance tax: businesses must track asset values and remit these taxes at the cost of considerable time and effort. Many states have shifted from such taxes, and Oklahoma should follow their lead, removing a tax that burdens businesses without providing much revenue for the state.

Top Wall Street analysts name their best stock ideas to ride out the market turbulence
Bond yields soar as markets weigh threat of a recession. What it means for your investments
Pimco’s Ivascyn sees a mild recession ahead and several investing opportunities
Impact of Italian Elections on National Tax Policy and EU Fiscal Policy
In the blogs: Constantly evolving