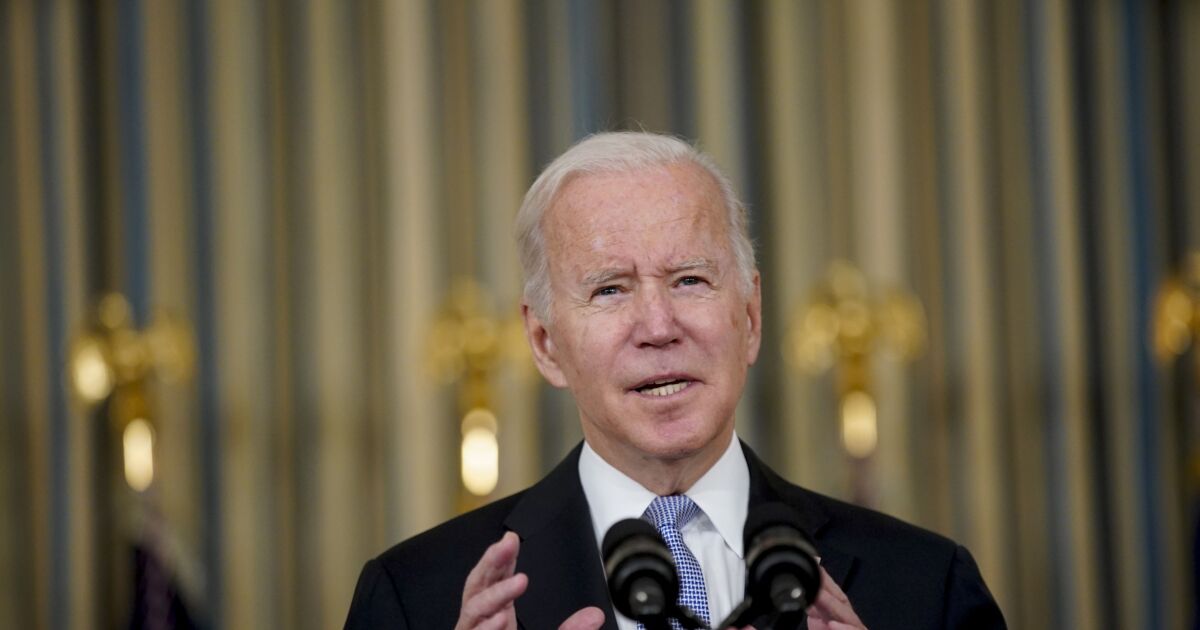 President Joe Biden celebrated House passage of the biggest U.S. infrastructure plan in decades, a crucial victory that he described as a direct response to voters who handed his party defeats in state elections last week.

“We took a monumental step forward as a nation,” Biden said Saturday at the White House, noting both the House’s late-night vote and October jobs growth that exceeded economists’ expectations.

The bipartisan, 228-206 vote late Friday sent the $550 billion measure — with money for new roads and bridges, as well as expanded broadband, clean water, power grid upgrades, pollution cleanup and other priorities — to Biden, who said he’ll sign it “soon,” but not this weekend.

The legislation follows setbacks for Democrats in Virginia, where Republican Glenn Youngkin was elected governor on Tuesday, and in New Jersey, where incumbent Governor Phil Murphy barely fended off a Republican challenger and the Democratic president of the state Senate lost his seat.

“For all of you at home who feel left behind and forgotten in an economy that’s changing so rapidly, this bill is for you,” he said. “This is a blue-collar blueprint to rebuild America.”

The Senate passed the measure in August. Progressive Democrats in the House blocked votes on the bill until Friday in order to pressure centrists in their party to support their priority, an even larger package of tax increases and social welfare programs called “Build Back Better.”

Passage of the public-works measure in the House required Republican support to overcome continuing opposition from a small number of progressives, a sign of the intra-party tension that led to months of wrangling. Together, the two bills comprise most of Biden’s economic agenda.

Clearing the infrastructure plan, which totals more than $1.2 trillion including routine highway spending, allows Biden to focus on the second measure, a $1.75 trillion package that aims to expand federal support for childcare and preschool education, fight climate change and raise taxes on companies and the wealthy. Democrats are still negotiating its details.

“When the House returns, we will pass our Build Back Better Act,” House Speaker Nancy Pelosi said in a statement that praised Biden for “his visionary and tireless leadership.”

Biden said he was confident he’ll be able to keep moderate Democrats in line to pass the social spending bill, though he declined to say whether any lawmakers had given him private assurances they won’t stand in the way of its passage. The House is scheduled to reconvene on Nov. 15.

Biden will embark on an “infrastructure week” tour over the next few weeks, doing events around the country to tout the coming investments, according to a White House official.

On Friday, a last-minute standoff between party progressives and moderates was resolved by Pelosi and an intervention by the president.

Pelosi and Biden failed to secure a vote at the same time on the bigger package, settling for a procedural measure that sets up a vote after lawmakers return from next week’s break.

In a concession to a small group of moderates who refused to vote on the public-works plan without a cost analysis by the Congressional Budget Office, the CBO score will be required before the House vote on the tax- and social-spending plan, which would then go to the Senate.

Biden said the Build Back Better legislation will be “fiscally responsible” and “fully paid for” by tax increases and other revenue-increasing measures. “It does not raise a single penny in tax for anyone making less than $400,000,” he said.

With the U.S still recovering from the coronavirus pandemic, Biden has portrayed the infrastructure investments as a historic response to Chinese competition that promises well-paying jobs in the U.S.

Passage of the infrastructure bill is “a major win for America” and proof that Congress can work together to solve pressing challenges, U.S. Chamber of Commerce President Suzanne Clark said in a statement.