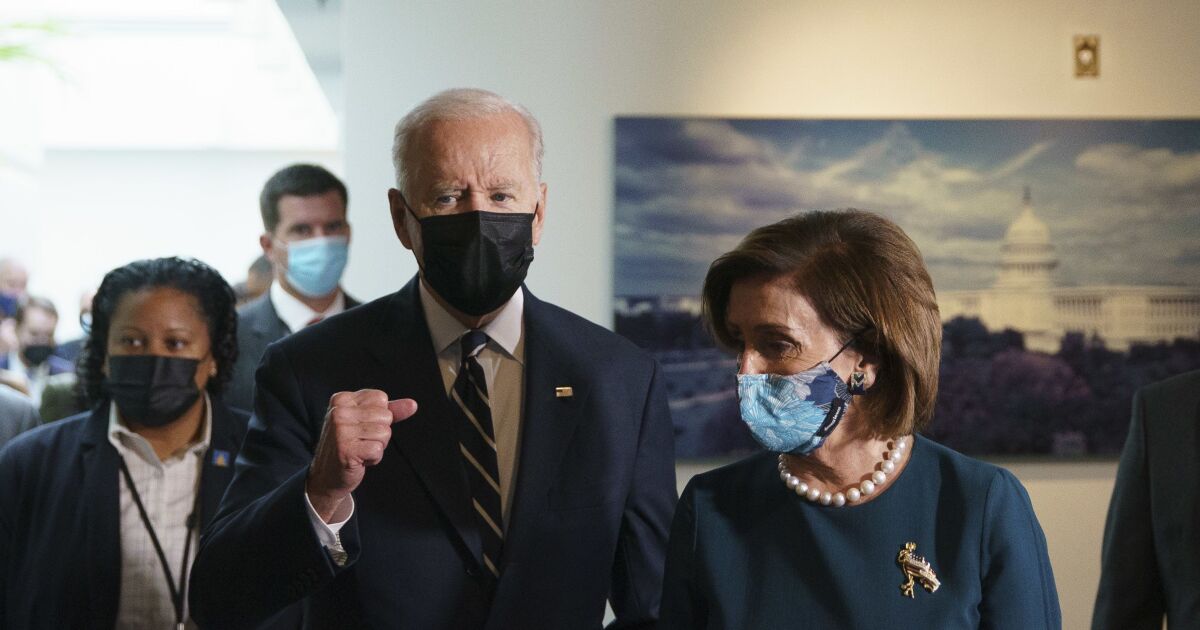 Congressional Democrats began a new round of haggling on President Joe Biden’s $1.75 trillion spending framework as they worked to fill in details and deal with last-minute attempts to restore priorities that had been left out.

With Biden on his way to European summit meetings, House Democrats Thursday released a rough draft of legislation to enact the plan, but it likely will take days or even weeks before it might be ready for a vote. Neither the House nor the Senate is scheduled to be in session Friday but negotiations were set to continue through the weekend.

In a setback for Speaker Nancy Pelosi, House progressives again blocked a vote on a separate infrastructure bill, a second piece of Biden’s agenda, until the larger package is ready. After she scrapped a plan to act on the infrastructure measure, the House passed another temporary extension for highway funding until Dec. 3, the same day as deadlines that could provoke a government shutdown and a debt ceiling default.

But the Biden framework triggered movement forward in the House when progressives formally endorsed a bill that is half the size they originally wanted. Representative Pramila Jayapal, head of the Congressional Progressive Caucus, said the group’s endorsement of it means that even if other priorities like paid leave are not added, CPC members would vote for it.

Still, the progressives’ move to put off an immediate vote on the infrastructure bill upset more moderate Democrats.

“Unfortunately, a small number of members within our own party denied the president — and the American people — a historic win,” said Representative Stephanie Murphy of Florida, a co-chair of the centrist Blue Dog Coalition, a group that identifies as fiscally conservative.

Biden and other top Democrats had hoped that passing the infrastructure bill would give a boost to struggling Virginia gubernatorial candidate Terry McAuliffe ahead of Tuesday’s election.

The tension underscores the drawn-out battle over the expansive tax and spending plan, particularly the lack of trust between liberals and two moderate Democrats in the Senate, Joe Manchin of West Virginia and Kyrsten Sinema of Arizona. Through extensive negotiations with Biden, they have whittled down his plan and left some progressive priorities by the wayside.

Both are pivotal votes in the 50-50 Senate and progressives want assurances that the two senators will back the compromise that emerged. Neither on Thursday gave their explicit endorsement of Biden’s framework, even though it appeared to meet most of their demands.

Sinema met Thursday afternoon with Jayapal and Senator Brian Schatz of Hawaii. She said little afterward, except that they “made progress.” Jayapal called it “a great meeting. That’s all I’m going to say about it.”

Manchin abruptly brushed aside questions about whether he supported the framework. “We’re working in good faith, how is that?” he said.

The Biden plan, known as Build Back Better, includes provisions Democrats called unprecedented that would include climate-change measures, universal preschool for three- and four-year-olds, subsidies for most Americans’ childcare costs and the creation or expansion of other social-welfare programs. It’s offset by tax increases and other revenue measures totaling about $2 trillion, according to a White House fact sheet.

The president delayed his departure for Europe to rally his party behind the $1.75 trillion outline, scaled back from a $3.5 trillion proposal. He met privately with House Democrats at the Capitol and then addressed the public from the White House.

“Any single element of this framework would be viewed as a fundamental change in America,” Biden said in his televised remarks. “Taken together, they’re truly consequential.”

The framework that the White House released Thursday won widespread praise from Democrats, even as some complained about components that had been cut, including a national paid family and medical leave plan, Medicare dental and vision benefits as well as some tax measures.

Pelosi, in a letter to her members on Thursday night, tried to put the continuing delays in a positive light. “As you know by now, the House will postpone the vote” on the Bipartisan Infrastructure Framework,” she wrote. “The good news is that most members who were not prepared to vote yes today have expressed their commitment to support the BIF.”

During the meeting at the Capitol, Biden assured the House lawmakers that the framework would win the votes of all 50 Senate Democrats. But several of them declined to commit to it.

“The administration may have negotiated with Sinema and Manchin; they’ve got to get 48 other people,” said New Jersey Senator Robert Menendez, who still wants to significantly alter the cap on deductions for state and local taxes, or SALT, and is trying to negotiate a deal on prescription drug pricing.

Lawmakers Thursday indicated a scaled back proposal to allow Medicare to negotiate the price of drugs was the most likely provision to be added to the bill. They also said Sinema and Manchin had not fully signed off on the framework’s Medicare hearing benefit so that could be dropped.

Separately, some House Democrats are demanding the Build Back Better legislation also include an immigration overhaul that would give undocumented people in the U.S. greater protections against deportation. The White House framework allows for such a program, but it isn’t clear if Senate rules would permit new immigration policies in the bill.

One of the next steps will be for Democrats to try to convince the top Senate rules official next week of the immigration provision, which would raise the framework’s topline to $1.85 trillion.

Still, there was optimism that Democrats were finally getting close to finishing work on the tax and spending package, which was a key promise of Biden’s presidential campaign.

“Legislative text is starting to become public, and the road to passing both critical parts of the president’s plan to make our economy deliver for middle class families — not just the wealthy — is clearer than ever,” White House Press Secretary Jen Psaki said in a statement on Thursday night.

“Things seem to be very close and we might even have a deal this weekend,” said Representative Ilhan Omar of Minnesota, a member of the progressive caucus leadership. “People are finally feeling the urgency to get this done.”

Jayapal also sought to project optimism that both parts of Biden’s agenda could be approved next week. She roundly rejected that the delay in the infrastructure vote was a setback for the president, and pointed out that progressives had endorsed the president’s framework on the social-safety net bill.

“The president did not ask for a BIF vote today. I just want to be very clear about that. The speaker did. But the president did not,” Jayapal said. “The president said he wants us to pass both bills and that this coming week was going to be critical for that. We should be able to vote on them very quickly.”

EITC rules have changed, so be careful
Testimony: Considerations for Additional Income Tax Reform and Relief in Nebraska
The Next Retirement Communities Won’t Be Just for Seniors
M&A roundup: Mergers from shore to shore
Robots could surpass workers at Amazon by 2030, Cathie Wood says