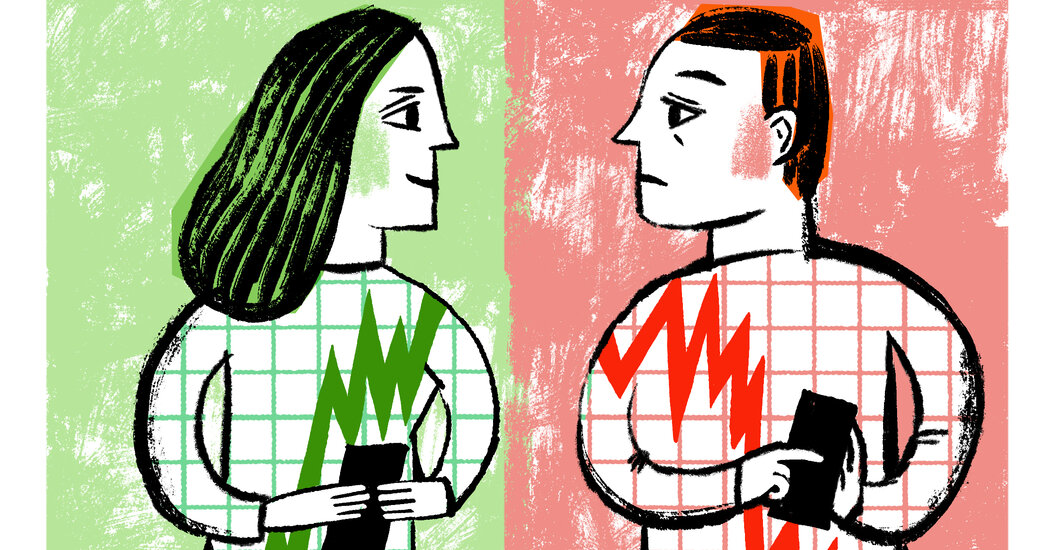 Overconfidence is bad, and women are less likely to fall victim to it.

Merrill was a guy, and so was Lynch. Goldman? A dude, and Sachs as well. Charles Schwab is a man, and so was E.F. Hutton. Gordan Gekko was an alpha male. And Jordan Belfort, the Wolf of Wall Street? Total bro.

Heroes or villains, winners or losers, real or imagined, our iconic investors are very, very male. But that’s a mistake — because it turns out that women are often better at investing.

Fidelity offered up the latest evidence this month: Over a 10-year period, its female customers earned, on average, 0.4 percentage points more annually than their male counterparts. That may not seem like a lot, but over a few decades it can add up to tens of thousands of dollars or more.

“Invest like a woman is what you learn from this,” said Lorna Kapusta, head of women investors and customer engagement at Fidelity.

This isn’t the first time that researchers have found women to be the better investors. The surprising thing about this phenomenon, however, is that neither women nor men seem to be aware of it — and they end up depriving themselves of some lessons that might help both genders invest better.

Fidelity’s analysis covered 5.2 million customer accounts (some people had more than one), from 2011 to 2020. It looked at individual retirement accounts, 529 plans and basic brokerage accounts that individuals (not financial advisers) controlled, but not workplace accounts like 401(k)s. No strategies were excluded: Those who traded individual stocks were tracked along with those who stuck to mutual funds.

The source of women’s superior returns is the way they trade. Or, rather, how they don’t. Female Fidelity customers bought and sold half as much as male customers. Vanguard saw similar patterns over the same decade-long period when examining workplace retirement accounts that it manages; at least 50 percent more men traded in them than women did every year during that time.

This is very bad. In a now classic paper that appeared in The Journal of Finance in 2000, titled “Trading Is Hazardous to Your Wealth,” two professors, Brad M. Barber and Terrance Odean, proved just that. From 1991 to 1996, individual investors who traded the most earned an annual return that was 6.5 percentage points worse than the overall performance of the stock market.

The following year, the two professors tackled trading and gender in a different paper called “Boys Will Be Boys.” Sure, women traded more than they should too, and from 1991 to 1997, their trading reduced their net returns by 1.72 percentage points per year. But the even more frequent buying and selling men engaged in caused them to take a 2.65 percentage point hit — more than twice the male underperformance that Fidelity found years later.

Why do men trade too much? Professors Barber and Odean chalked it up to overconfidence. And where does overconfidence come from? William J. Bernstein, a neurologist who turned his attention to investing years ago, points to testosterone.

The hormone causes three problems for investors: It decreases fear, increases greed and very much contributes to overconfidence. “It does wonderful things for muscle mass and reflex time but doesn’t do much for judgment,” he said.

If you fear too little, you’re more likely to get hit hard when markets fall, since you’ll have too much money in the wrong kinds of investments. Similarly, too much greed can lead to too much risk. As for overconfidence, Mr. Bernstein, who is the author of books, including “The Investor’s Manifesto,” suggests a self-administered test question: How certain am I of what I’m doing? “In finance, if you’re certain of anything, you’re out of your mind,” he said.

Women, meanwhile, probably aren’t as confident as they should be. Fidelity’s evidence on this topic is downright depressing: In 2017, one of its surveys showed that just 9 percent of women thought that they would outperform men as investors. This year, only 14 percent of women said they knew a lot about saving and investing and 33 percent felt confident making investment decisions.

How did we get here? Some of the answers are obvious, for women who are married to men at least: For a long time, many husbands simply wouldn’t let their wives have anything to do with investing, whether because the men felt entitled to have control as they were the sole or primary earners or because they had an undeserved conviction that they were better suited for the task. It’s hard to gain confidence with no experience.

To even attempt to invest is to make choices in the absence of complete information. But this can be hard for women, said Manisha Thakor, a financial planner and founder of MoneyZen, a consultant in Portland, Ore. “Women are socialized to be perfect, to know everything before we take a step,” she said, pointing to a TED Talk that Reshma Saujani, founder of Girls Who Code, gave on the topic. “Men are more comfortable making decisions without knowing everything,” she added.

Ms. Kapusta of Fidelity also places some of the blame for underconfidence on the way that the financial services industry has talked about itself. “It’s jargon,” she said. “Alpha. Beta. Even the way new solutions are named. Roboadviser. What’s a roboadviser?”

Investing should not involve weird words or be complicated, though. Buy a few funds that grab every stock or bond in a particular market segment, take a reasonable amount of risk given your investment goals and time horizon, and then leave the money alone until you need it.

That last part is important, given that investing success has a lot to do with your behavior. You can learn the basics of investing in five minutes, but you need to keep your emotions in check for five decades or more to succeed.

That’s what studies like Fidelity’s boil down to. And every time another like it emerges, it’s worth shouting the results from the rooftops, so that more women feel good about starting to invest or keep doing it in a way that leads to outsize success.

Is there a risk of defaulting to stereotypes here? Sure. These are averages we’re talking about, and underconfident men and fearless women are all around us. Many young men hang on every word that Cathie Wood, a famously aggressive money manager, utters.

Certainly, a lack of fear and above-average greed can enrich lucky people of either gender who put all of their money in a bucket that contains just a handful of stocks that end up doing very well. This only works, however, if they leave it there over decades and don’t make the mistake of selling when stocks have fallen and buying when they are high.

In an interview this week, Professor Odean, a finance professor at the Haas School of Business at the University of California, Berkeley, gave some guys an out. After all, some of the money in the Fidelity accounts that the company studied was probably a kind of play currency.

He has no problem with people gambling on stocks with money that they can afford to lose, if that is how they define fun. Maybe that could be 10 percent of your overall portfolio, with the rest in investments that you leave alone while they capture every stock or bond in the market.

One question for women in heterosexual marriages and men in gay ones, then, is this: If you long ago handed off the investing responsibility to your husband, perhaps now is a good moment to initiate a little chat to make sure your household is following that 90/10 rule. “It’s not like every husband is out there buying GameStop,” Professor Odean said. “But if your husband is, you might want to make sure that he’s doing it with a little bit of money and not a lot.”

Ms. Kapusta said couples should be sitting down at least once a year to discuss their investing strategy, anyway. It shouldn’t be an argument, either.

And maybe you can bring out the best in each other.

The war over the Tax Mandate grinds on
Almost half of Americans think we’re already in a recession. Here’s how to prepare if they’re right
This Social Security change would be ‘easiest and quickest,’ Manchin says. What debt ceiling negotiations may mean for benefits
Senators propose tax break for beauty salon, barber tips
As Asian Societies Age, ‘Retirement’ Just Means More Work