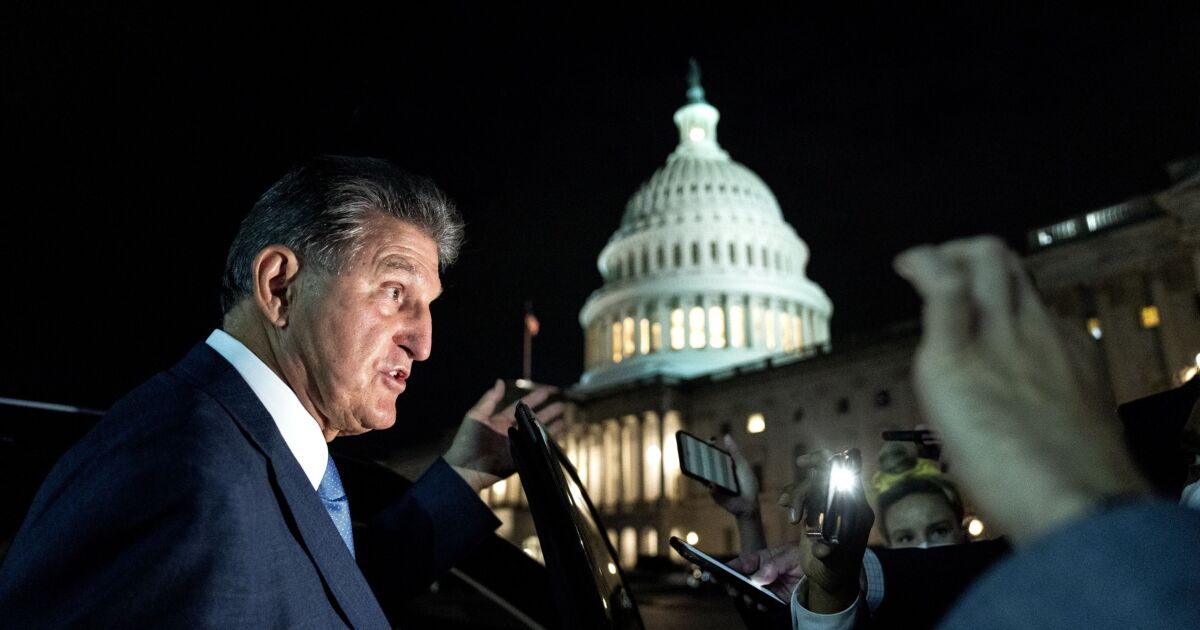 “There is an awful lot to go. I don’t know how that would happen,” Manchin, whose vote is pivotal in the 50-50 Senate, told reporters Monday at the Capitol. “Once you come to a meeting of the minds, you might be able to work something out.”

With the clock ticking, Biden is using phone calls and meetings to swing the party’s two competing factions in line. As he headed toward the Oval Office on Monday he told reporters he’d be working to persuade Manchin “right now.”

House Democratic leaders have said they are aiming to vote on the two main pieces of Biden’s domestic plan — a bill with $550 billion in new funding for infrastructure and a multi-trillion-dollar tax and spending package — by Oct. 31.

That’s when a temporary extension of highway maintenance funding runs out again, forcing some kind of congressional action, and Senate Majority Leader Chuck Schumer has called on Democrats to resolve their differences on the second bill by then. Progressives have blocked the House from acting on the Senate-passed bipartisan infrastructure bill, which includes highway funding, until a deal on the separate spending and tax legislation is reached.

Manchin’s vote will be needed to pass Biden’s plan, which includes provisions to fund child care, programs for the elderly and climate measures mostly funded by higher taxes on the wealthy and corporations. The West Virginia Democrat also said he opposes a clean power plan backed by Biden, prompting the Biden administration to look for alternatives.

The White House initially backed a $3.5 trillion draft plan, but Manchin said Monday he is sticking to a limit of $1.5 trillion in spending. He said that other requirements he has outlined, including work requirements for new social programs, also remain in effect. Biden has said he expects the compromise figure will be about $2 trillion.

An additional complication is that Senator Kyrsten Sinema, an Arizona Democrat whose support also is critical for Democrats to advance the bill, has yet to publicly lay out her main demands for legislation.

Democrats fear that ongoing intra-party squabbling over the size and scope of the tax and spending bill could damage the party in the 2022 midterm elections.

“The longer we wait, the less likely that we’re going to produce a product that the American people are anxious to receive,” Senator Dick Durbin, the chamber’s No. 2 Democrat, said.

The president on Monday spoke with Representative Pramila Jayapal, the head of the Congressional Progressive Caucus, and plans separate meetings Tuesday with liberal and centrist Democrats.

“We are at a point where we feel an urgency to move things forward,” White House press secretary Jen Psaki said, adding that an acceleration of Biden’s calls and meetings “is a reflection of that.”

— With assistance from Laura Litvan