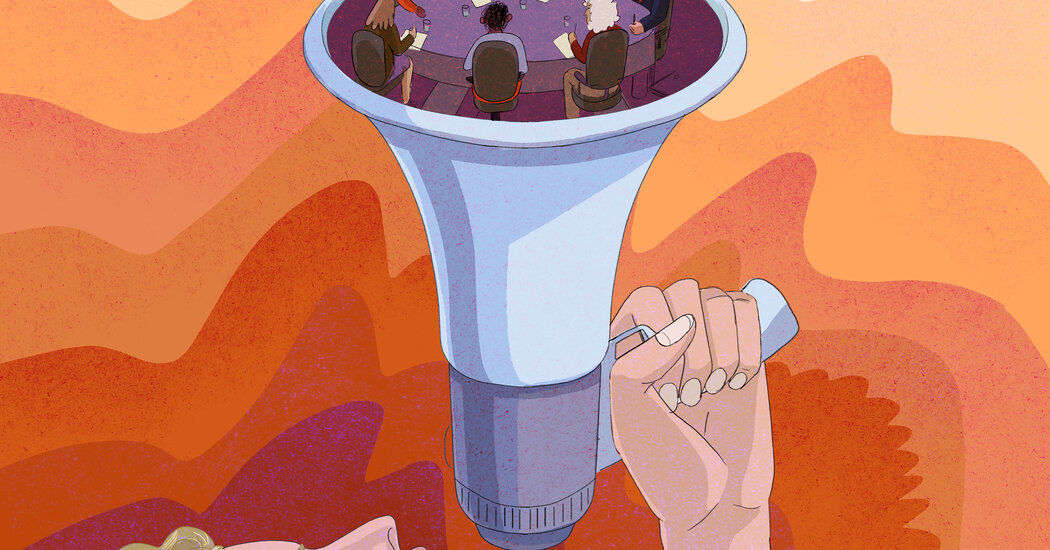 Fund investors are rarely asked what concerns them or how they’d vote. But now, several measures aim to do that. Still, it’s just a start, our columnist says.

When you buy shares of a publicly traded company, you’re a part owner and, in theory, have a right to vote on some important matters that come before that company’s board of directors.

Yet millions of people have had virtually no voice in the decisions of publicly traded American corporations, even though they have ownership stakes.

The problem is that those stakes are indirect — held through mutual funds, exchange-traded funds and pension funds. Under current regulations, these various funds control voting rights that might otherwise go to shareholders and to those who receive or are vested in pensions. And as indirect ownership of stocks grows, the problem is worsening.

Historically, these obstacles have made the notion of shareholder democracy something of an oxymoron, as I’ve pointed out in several columns.

But there has been substantial progress lately in three areas that could give shareholders a far greater voice: innovations aimed directly at retail investors; redistribution of some of the power held by asset managers so institutions like pension funds and universities can more readily control their proxy votes; and proposals on the regulatory front that would reverse Trump administration measures restricting proxy access and investor choice.

A radical notion: asking investors what they want.

But from the standpoint of shareholder democracy, such funds have amassed so much power that they have come to pose an enormous danger, in the view of many experts who have studied them closely. The Securities and Exchange Commission estimates that indexed mutual funds and E.T.F.s. now own 30 percent of the equity in the U.S. stock market, and the proportion may be approaching 50 percent when you include indexing strategies used by institutional investors.

The big index fund companies like BlackRock, Vanguard, State Street and Fidelity are typically among the largest shareholders of publicly traded companies. Yet their ultimate owners — the millions of people who own stakes in index funds — have had little voice.

Fund companies have rarely asked shareholders what issues concern them, to say nothing of how they’d like their votes cast. And it’s extremely difficult for investors to know how their fund companies voted, and what their policies are on issues like climate change, corporate compensation (“say on pay”) and diversity, equity and inclusion.

One of the most interesting is a collaboration between an activist hedge fund, Engine No. 1, and the asset management platform Betterment, demonstrating that it’s easy to ask index fund investors what corporate battles they believe are most worth waging.

The hedge fund in June started a new exchange-traded fund, available to individual investors. The fund is formally called Engine No. 1 Transform 500 ETF, but it has a catchier ticker symbol: VOTE. In important ways, the fund is quite ordinary: a plain vanilla E.T.F. with an expense ratio of 0.05 percent, making it a reasonable alternative to standard S&P 500 index funds run by far bigger companies.

But this one has the express aim of “harnessing the power of investors to actually change companies,” said Michael O’Leary, managing director of Engine No. 1. Those may seem idle words, until you recall that Engine No. 1 has already shaken up one company — Exxon Mobil, in one of the most startling proxy fights of recent times.

The little hedge fund managed this spring to get three dissident directors elected to Exxon’s board with the goal of pushing the energy giant to reduce its carbon footprint and accelerate its shift from fossil fuels. While Engine No. 1 held only a tiny fraction of Exxon’s shares, its arguments persuaded BlackRock, State Street and Vanguard to take its side.

Now, Betterment has included the new VOTE fund in an investment portfolio aimed at “socially responsible” investors, and has been conducting a test poll, asking those investors what battles they want Engine No. 1 to wage. More than a thousand shareholders responded, with 60 percent saying they wanted the hedge fund to stick with climate change: “Push more oil and gas giants to embrace the transition away from fossil fuels” was the overwhelming preference.

Boris Khentov, head of sustainable investing at Betterment, said: “We need shareholder democracy, and we’re not going to have it unless shareholders have a way of expressing what they want. Well, we decided that it was important to actually ask them.”

Several other experiments are underway, with the aim of giving investors clearer information about what corporations are actually doing and a greater say about those policies. In Britain, a start-up called Tumelo, founded by several recent Cambridge graduates, has created a user-friendly web platform that enables investors to obtain succinct, easy-to-read information about corporations in their fund portfolios.

What’s more, it conveys their preferences about proxy votes to the people who run their funds and administer their defined-benefit retirement accounts. Tumelo’s services are already being used by investors with major British asset managers, including Legal & General and Aviva, said Georgia Stewart, the firm’s chief executive and one of its founders.

Tumelo isn’t available to investors in the United States yet but Ms. Stewart said “we are going to come to the United States soon.” Tumelo is already working with American-based firms that do business in Britain, she said, including BlackRock and Vanguard.

As more companies adopt platforms like these, it may make it possible to achieve something I’ve long advocated: Investors could vote with their money, by moving to funds with whose voting preferences they are aligned. Remember, low-cost S&P 500 index funds are virtually identical as pure investments, but as the VOTE fund demonstrates, they can be quite different in their approaches to social, political and environmental issues.

Regulators and big institutions are taking steps, too.

British regulators have been pushing money managers to give institutional investors like pension funds more control over their corporate proxy voting. That movement has begun to reach the United States.

BlackRock manages $4.8 trillion in stock index strategies and controls the proxy votes for most of it. An announcement by the company this month indicated that it will be dispersing some of that power, giving institutional investors, like pension funds and universities, more options and control over their voting starting in 2022.

BlackRock’s move is voluntary. Regulators in the United States haven’t been involved, so far.

But American regulators have begun to embrace several other critical measures.

The Labor Department on Wednesday proposed measures that would reverse Trump-era rules for 401(k)s and other retirement plans. In effect, the proposals could make socially conscious investing an integral part of many workplace plans.

One regulation would encourage 401(k)s to include issues like “climate change and other environmental, social and governance factors when they select investments and exercise shareholder rights” in proxy voting. Another would make it easier to include funds that emphasize these factors as core investments in retirement plans.

And the Securities and Exchange Commission in September issued a proposal that would make fund proxy voting much easier for investors — and journalists — to track. It would require that reports on voting decisions be issued in a standard computer-friendly format, making them readily available for tabulation, analysis and dissemination. What the proposal has not done, however, is speed up the frequency of reporting on proxy votes, which only needs to be done annually, under existing rules.

We still don’t have an accurate tally of the 2021 proxy voting season, for example. “Imagine if you had to wait up to 15 months to find out how your representative voted on important legislation currently going through Congress,” said Mr. Khentov, of Betterment. “That’s pretty much the situation for proxy voting now, and that’s got to change. We need to give people access to timely information, in an understandable format, and then let the market decide.”

Much needs to be done. There are no panaceas here. But giving a voice to individual investors is on the public agenda now, and, at least, there’s been some important progress.