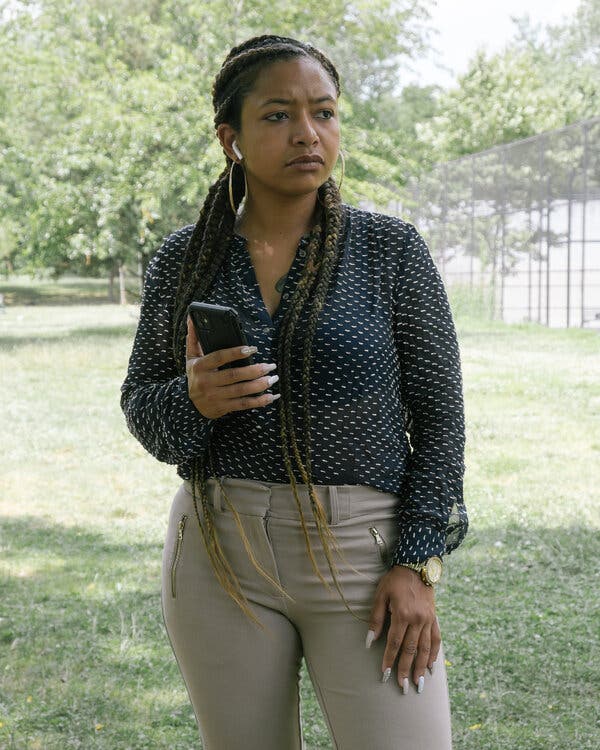 It was February 2020. Brittany Jones had high expectations for the Atlanta-based Airbnb rental business she had just launched. “‘Oh wow, this is going to be great,’” she said she remembers thinking. “We were getting bookings fast, well into the summer.”

The 34-year-old single mom was soon pouring her hard-earned savings into the venture as Covid-19 lockdowns brought everything to a halt. “The biggest thing was trying to keep the business afloat throughout the pandemic,” she said. More than a year later, much of the $10,000 in savings she dipped into and the $20,000 in credit card debt she accrued remains outstanding. “Now I’m at a point where the business is making money, but I’m still kind of scared.”

Many millennials were thrust into adulthood circa 2008, during what was, at the time, the worst economic downturn since the Great Depression. Then, barely a decade after that meltdown, the coronavirus pandemic cratered commercial activity and sent unemployment soaring. With savings tapped out and retirement accounts drawn down, this generation is experiencing déjà vu, along with fresh worry that their window for achieving financial security in retirement has already begun to close.

Many dread the thought of starting from scratch — whether it’s replenishing an emergency fund or retirement account. Others simply don’t know where, or how, to begin.

Ms. Jones, whose business partner is her ex-husband, said she applied for a Paycheck Protection Program loan but was turned down with no explanation. A December survey by the coalition Reimagine Main Street found that Black entrepreneurs like Ms. Jones were approved for P.P.P. funding only about half as often as white small-business owners. “It was all just savings that we used. It’s very scary to be using savings to fund a business when you don’t know what’s next or how long we’re going to have to do this,” she said.

Her previous job as a military contractor didn’t offer a 401(k), and Ms. Jones said she doesn’t have a dedicated retirement savings account. “It was just that same savings account. It wasn’t anything sophisticated at all,” she said.

Black Americans overall have less access to retirement investment vehicles, according to the Federal Reserve, which found that only 56 percent of Black families and 44 percent of Hispanic families have access to an employer-sponsored retirement plan, compared with 68 percent of white families. “If you look at retirement wealth inequality broadly, there’s a tremendous amount of it,” said Geoffrey T. Sanzenbacher, an associate professor at Boston College and a research fellow at its Center for Retirement Research.

Ms. Jones said travelers have returned and bookings have grown as the economy reopened, but her own finances have yet to recover. “Although we’ve had some good months here recently, it was also a matter of playing catch-up,” she said. “It doesn’t feel like I’m on my feet.”

Anxiety can be acute after a financially destabilizing experience, said Brent Weiss, co-founder of the financial-planning firm Facet Wealth in Baltimore. “When we have to dip into the money we had to work hard to save it elicits emotions,” Mr. Weiss said.

“It’s been a struggle for the millennials. This is really the second major crisis they’ve gone through,” said Victor Russell, an operations manager at Apprisen, a credit counseling agency.

Unemployment was elevated and underemployment was rife in 2008, as many millennials were entering the work force. “They made it through that and now, unfortunately, this pandemic crisis has really derailed their efforts to move ahead,” Mr. Russell said. “There have been individuals that tapped into their retirement accounts. Those that have not have really burned through their savings.”

In ordinary times, the I.R.S. levies a 10 percent penalty on distributions taken before the account holder is 59 ½ — a penalty designed to discourage retirement savers from dipping into their nest eggs. People taking early distributions from a tax-preferred retirement account also have to pay income tax on the funds they withdraw. (The conventional wisdom is that people will have less income in retirement and, as a result, be in a lower tax bracket than they would be during their careers.)

Faced last year with soaring unemployment and shutdowns that halted work for millions, lawmakers included a provision in the CARES Act that waived the withdrawal penalty for people who suffered Covid-related financial hardship and needed to take an early distribution from a traditional I.R.A. or an employer-sponsored defined-contribution retirement account, like a 401(k) or 403(b). The provision came with a three-year grace period for replacing that money on a pretax basis.

“The CARES Act was almost like a carrot incentivizing people not to do the right thing,” said Clark Kendall, the president of the financial-planning firm Kendall Capital outside Washington.

According to a survey released in December by the TransAmerica Center for Retirement Studies, 15 percent of millennials said they had taken an early withdrawal from a 401(k) or similar plan, compared with 10 percent of Generation X and 4 percent of baby boomers.

“Those bills, they come like clockwork,” Mr. Burns, 41, said. “I pay $600 a month in child support, and I’m still paying rent and utilities and all.” He estimated that he had drawn down roughly $10,000, first depleting the few thousand dollars he had in savings before using the CARES Act provision to withdraw from his 401(k).

Now, his work has picked back up, but Mr. Burns frets that he is missing out on the meteoric rise the stock market has undergone since its trough in the spring of 2020. “I do need to get my nest egg back,” he said.

A survey conducted in May by Bankrate.com found that the pandemic had prompted more people to prioritize saving for emergencies — but the loss of income many have experienced over the past year makes the leap from intention to action a yawning chasm. For young adults already on the financial brink, any stumble can be enough to send them tumbling into debt.

“The biggest thing with young people is a lot of them were never really taught about saving and budgeting and building their credit, which is so important,” said Christina Pawlak, a credit counselor at Consumer Credit Counseling Service of Maryland and Delaware. “They have no emergency savings and put everything on credit cards they are unable to pay, which is destroying their credit.”

One of Ms. Pawlak’s clients is Cristal Duarte, a 31-year-old resident of the Bronx who juggles a full-time and two part-time jobs.

Ms. Duarte said she considers herself fiscally responsible, but costs related to her father’s death from an aggressive cancer two years ago and his wish to be buried in his native Dominican Republic plunged her into nearly $30,000 of credit card debt. Just staying ahead of the interest charges became a struggle, with some of her cards carrying annual rates as high as 29 percent. “They ruined me in interest,” she said.

When Ms. Duarte had to move in February 2020, that meant more expenses, more debt — and then the pandemic hit. “Staying home, my electric bill skyrocketed,” she said. “All my bills are just increasing,” especially since her younger sister and 8-year-old nephew moved into her one-bedroom apartment last year. Until recently, she was the sole provider for all three.

Ms. Duarte said she expected to work three jobs for the foreseeable future. “There’s nobody I can really go to for help. I came from a very poor socioeconomic background,” she said. “If I were to get kicked out of my apartment, I would be homeless.”

Like many millennials, Ms. Duarte is skeptical that any social safety net will be intact at all by the time she reaches retirement age. “With the way Social Security is going, and especially this pandemic, I don’t think it’s going to be there in 30 to 40 years,” she said. “A lot of the retirement has to come from my own legwork. Otherwise, I’ll be working till I’m dead.”

What you can do

It can be daunting for anyone to recover from a financial hit. Younger workers have the advantage of time to rebuild savings and retirement accounts, but they also have lower earnings — and many also have student loan debt. But there are a number of steps people can take — no matter their current financial situation — to get back on track.

Save something — even 1 percent. “Automate savings everywhere you can. What we typically do is spend first and try to save what’s left,” said Mr. Weiss of Facet Wealth. “Pick some amount that can work for you, save first and automate it,” he said, using tools like direct deposit or automatic monthly transfers into savings.

Pay back Covid withdrawals. “If you did take a Covid-related distribution, that would be the highest priority to pay that back,” said Scott Thoma, a principal at the investment firm Edward Jones. Account holders have a three-year repayment window to retain the tax-favored status of those funds — although the actual process is a bit complex, requiring taxpayers to file one or more amended tax returns depending on when they returned the money to the account. The sooner you can replenish that money, the better, Mr. Thoma said.

Build an emergency fund. While six months’ worth of living expenses is the conventional suggestion for a savings account goal, it’s OK to start smaller, Mr. Thoma said. “The first milestone is building about a month of living expenses,” he said, because not having any cash can force people into a cycle of credit-card debt. Next, the focus should be on retirement contributions up to the employer match if your job offers matching contributions.

“After that, be able to look at the debt situation that you have before you start allocating more to the retirement fund, looking at the debts you might have and prioritizing any high interest, nondeductible debt you might be carrying,” Mr. Thoma said.

Prepare to resume paying student loans. The pandemic-era student loan repayment suspension ends in September, he noted, recommending that borrowers think ahead about those payments. One tactic for doing so would be to act as if the payments have already restarted and funnel that money toward other obligations, particularly credit card debt. “Now might be a great window to try to pay down any high-interest debt,” he said.

The most important thing, Mr. Weiss said, is to just get started at whatever level you can. “You don’t have to go from zero to 60,” he said. “Incremental, implementable steps will lead to success.”