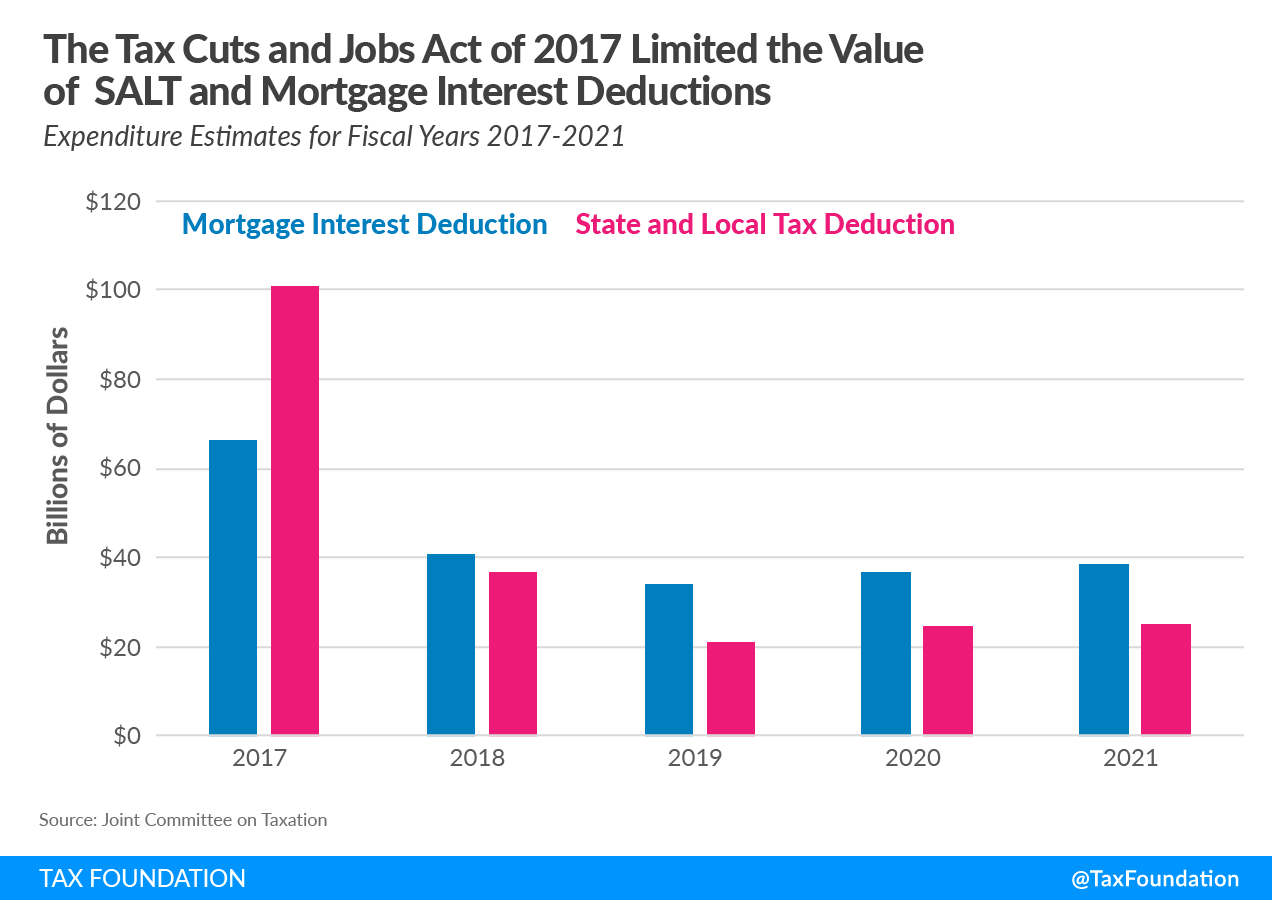 Two major provisions in the federal tax code have been limited since the Tax Cuts and Jobs Act (TCJA) of 2017: the state and local tax (SALT) deduction and the home mortgage interest deduction (MID). Limiting the two provisions helped broaden the tax base, offsetting tax revenue loss from reduced tax rates. The limitations are slated to expire at the end of 2025, but policymakers should consider extending them along with the lower tax rates.

Among itemized deductions are the MID, which grants homeowners the ability to deduct mortgage interest paid on either their first or second residence. The TCJA limited the interest deduction to the first $750,000 in principal value, down from $1 million. Another itemized deduction is the SALT deduction, which grants individuals the ability to deduct state and local taxes against their federal taxable income. The TCJA limited the SALT deduction to $10,000.

While the deductibility of mortgage interest moves the tax treatment of residential real estate closer to a consumption tax, there are still critiques of the MID. High-income taxpayers are more likely to itemize their returns and are often the main beneficiaries of this deduction. The real value of the MID also increases with the value of the home, making the benefits even more concentrated among wealthy individuals.

Increased demand spurred by the MID can also lead to increased housing costs, mainly among taxpayers who itemize, making the housing market less accessible more broadly. Critics of the change suggested it could result in less mortgage participation, hurt the middle class, and reduce the homeownership rate. However, we find little evidence supporting these claims. After 2025, MID claims may increase as TCJA’s limitation expires.

The SALT deduction is similar to the MID in that it is another itemized deduction limited by the TCJA. Prior to the TCJA, individuals could deduct an unlimited amount of state and local income or sales taxes, real estate taxes, and personal property taxes against their federal taxable income. Post-TCJA, the SALT deduction is capped at $10,000 for income, sales, and property taxes (unless they were related to business activity). The cap made the tax code more progressive by broadening the tax base, and it helped partially fund reductions in statutory tax rates.  Repeal of the SALT deduction cap would be more regressive than the entirety of the TCJA and provide a $31,000 tax cut for the top 1 percent of earners.

Given the changes to the MID and SALT deductions in the TCJA, one would expect a sizable decrease in those tax expenditures for fiscal years after the passage of the bill. Tax expenditure estimates from the Joint Committee on Taxation (JCT) indeed show that: estimated claims for the MID fell from $66.4 billion in 2017 to $38.7 billion in 2021 and for the SALT deduction, from $100.9 billion in 2017 to $25.2 billion in 2021. Rather than making these limitations more generous or repealing them early, policymakers should consider keeping these limitations in place.