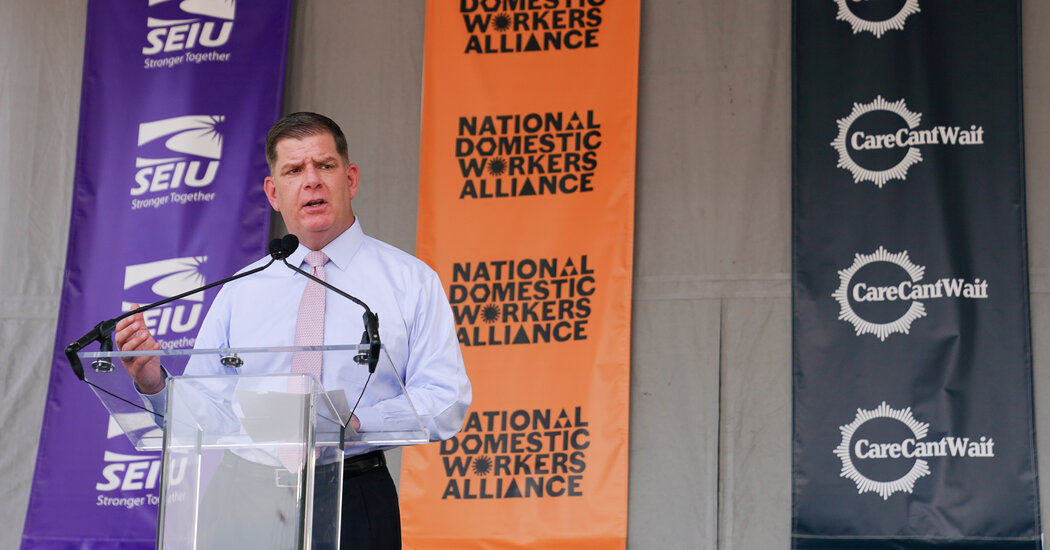 The Labor Department will propose rule changes on Wednesday that would make it easier for retirement plans to add investment options based on environmental and social considerations — and make it possible for such options to be the default setting for enrollees.

In a reversal of a Trump-era policy, the Biden administration’s proposal makes clear that not only are retirement plan administrators permitted to consider environmental and social factors, it may be their duty to do so — particularly as the economic consequences of climate change continue to emerge.

Martin J. Walsh, the secretary of labor, said the department consulted consumer groups, asset managers and others before writing the proposed rule, and that the change was considered necessary because the old one appeared to have a “chilling effect” on using environmental, social and governance factors when evaluating investments.

“If these legal concerns were keeping fiduciaries on the sidelines, it could mean worse outcomes for workers and retirees,” Mr. Walsh said in an interview.

The new regulations would also make it possible for funds with environmental and other focuses to become the default investment option in retirement plans like 401(k)s, which the previous administration’s rules had prohibited. But the rule would not permit plan overseers to sacrifice returns or take on greater risks when analyzing potential investments with a focus on environmental, social and governance factors, known as E.S.G., Labor Department officials said.

Under the Employee Retirement Income Security Act of 1974, known as ERISA, retirement plan administrators must act solely in the interest of the plan’s participants. Investments that focus on environmental, social and governance have been permitted, but only if they are expected to perform at least as well as alternatives that take similar levels of risk.

That has become known as the “tiebreaker” or “all things being equal” standard, a guiding principle that has effectively remained the same through Republican and Democratic administrations, though they have interpreted it differently.

The proposed change indicates that plan managers are allowed to consider E.S.G. factors in their initial analysis of investments instead of only at the very end — a change that Labor Department officials argued still maintains that principle, because managers still are not permitted to sacrifice returns for those kinds of ancillary benefits.

For example, the proposed rule said that accounting for climate change, “such as by assessing the financial risks of investments for which government climate policies will affect performance” can benefit retirement portfolios by mitigating longer-term risks.

“If an E.S.G. factor is material to the risk-return analysis, that is something we think fiduciaries should be taking into account,” Ali Khawar, an acting assistant secretary in the department, said in an interview. “That carries different weight than five or 10 or 15 years ago,” he said, given the increase in data quantifying the risks of ignoring E.S.G. and the benefits of taking them into account.

The investment category has grown significantly in recent years. Total assets in E.S.G. funds rose to $17.1 trillion at the start of 2020, up 42 percent from the start of 2018, according to the U.S. SIF, a nonprofit focused on the sustainable investing. That investment total represents one in three dollars under professional management.

Just a small fraction of those investments are held by retirement plan investors, a U.S. SIF report said, even as interest is rising, particularly among younger investors.

The Biden administration also proposed changes that would reverse another Trump-era rule, which required retirement plan administrators to consider a complex list of principles before casting proxy votes on shareholder proposals, which may have discouraged plans from voting altogether. If fiduciaries decided to vote, and the rule makes clear that isn’t required, they must only support causes and goals in the plan’s financial interest.

The proposal would remove that language, Labor Department officials said, and largely allow plan fiduciaries to decide when “it is or isn’t appropriate to act,” Mr. Khawar said.

Stakeholders will have 60 days after the proposal is published in the Federal Register to comment. A final regulation is typically issued after the department reviews the comments.

New Year, New Financial Goals (And How to Stick to Them)
Top Stock Picks for Week of January 30, 2023
Buy this Soaring Tech Stock Up 100% in the Last Year for More Upside?
Zoho Bigin Updates Provide Small Businesses with Interoperability and Affordability
5 Earnings Charts at 52-Week Highs