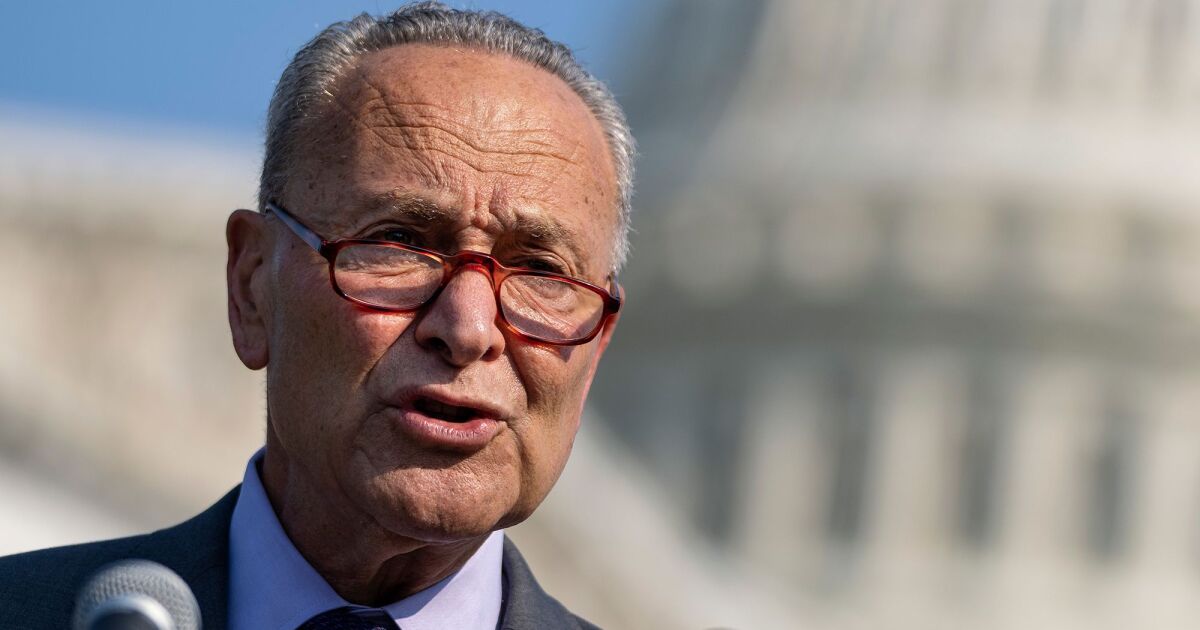 The Senate is nearing a deal on a short-term increase in the debt ceiling that would pull the U.S. from the brink of a payment default but threatens to exacerbate year-end clashes over trillions in government spending.

After weeks of stalled talks, Democrats appeared to be on the verge of accepting a proposal from Senate Republican leader Mitch McConnell to raise the debt limit by a specific amount that would be sufficient to tide the Treasury over until December, when Congress would have to vote again to avoid a default.

McConnell said earlier that the two parties were “trading paper” on the specifics of the agreement. Schumer said the Senate would come back into session at 10 a.m. Thursday.

News of a possible debt-ceiling accord stoked the biggest positive turnaround in the equity market in more than seven months, as the S&P 500 Index closed up 0.4% after tumbling earlier. In the bond market, traders bid back up the prices of Treasuries set to mature in the window around a potential default. Investors then moved on to gauge which securities may now be most at risk of a missed or delayed payment under the new congressional timeframe.

For the economy, the fiscal impasse has added to dampers on confidence generated by rising cost pressures, supply disruptions and the delta variant of the coronavirus. Economists are estimating a notable slowdown in the recovery for the second half of 2021.

Treasury Secretary Janet Yellen has warned that the U.S. could be unable to meet all its payment obligations after Oct. 18 without congressional action.

While the immediate threat of a default would recede, the deal would merely delay the fight to December, when Democrats likely will try to move a massive tax and spending package and a separate infrastructure bill. Congress also must act to fund the government and avert a shutdown after Dec. 3.

That could be politically perilous for Democratic lawmakers still sharply divided over President Joe Biden’s $4 trillion economic plan — particularly for moderates in swing states who worry about the overall cost.

“It’s a pretty clear message to voters that they’re spending your money, raising your taxes and adding to the national debt,” Ferrier said. “And it’s in pretty short order that they will be voting on tax, spend in the big reconciliation bill and debt in the debt limit bill,” Ferrier said.

Several Democrats, however, quickly declared victory at the seeming break in the debt ceiling impasse.

Senator Bernie Sanders, the Vermont independent who chairs the Budget Committee, said the possible deal gives the Democratic caucus more time to coalesce around a tax and spending plan.

“Around here, two months is a lifetime,” Sanders said. “We’re going to pay our debts, we have two months to figure out where we go from here.”

McConnell made his offer as he was coming under increasing criticism from Biden and Democrats that he was risking economic calamity by blocking attempts to lift the debt limit.

Part of his strategy is attempting to force Democrats to use the reconciliation process to raise the debt ceiling, which would leave Republicans entirely removed from the process — and from any political fallout.

Schumer has repeatedly said there wasn’t enough time for reconciliation before the U.S. Treasury was forecast to run out of borrowing authority sometime in mid-October. Budget experts say it would take about two weeks. McConnell’s move was designed to call the Democrats’ bluff while showing Republicans were willing to be flexible, according to a person familiar with this thinking.

“This will moot Democrats’ excuses about the time crunch they created and give the unified Democratic government more than enough time to pass standalone debt limit legislation through reconciliation,” McConnell said in a statement.

In about two months, the Democrats will be facing the same dilemma. Sanders said they would refuse to raise the debt ceiling through the reconciliation process — the procedure they are employing to move the expansive tax and spending package with much of Biden’s agenda.

‘Try voting for it twice’

“His goal was always to put this on their shoulders, and it’s a number. He’s always wanted it to be a number,” Hoagland said.

“You think it’s hard to vote for increasing the debt limit once, you try voting for it twice,” Hoagland said.

It’s unclear if the Treasury would be allowed to deploy extraordinary accounting measures in December to extend a default deadline once again.

“There will be some uncertainty about when the next deadline will hit,” Alec Phillips, chief political economist at Goldman Sachs, said in a note to investors. “However, it looks unlikely that the Treasury will be able to rely on extraordinary measures to operate for a few months past the new deadline as has been the case after following the end of debt limit suspensions over the last decade.”

The standoff over how to lift the debt limit also suggests that Congress could be handling increases in borrowing authority through short-term fixes, at least for the time being.

Going the traditional route, Democrats would need at least 10 Republicans to capitulate and agree to clear the way for legislation to raise the debt ceiling for a longer period. So far, there is no sign of that many GOP defections. That could mean that Congress will be forced to keep kicking the issue down the road for a few months at a time.